The plan for today was to cruise around the Shibuya and Shinjuku areas, both known for pop culture and shopping.

On the way, since it was fine out, we went to visit the Senso-Ji temple and its surrounds.

A and I collected our fortunes, paying our 100¥ and shaking the tin. Mine was 五十五 (55), which turned out to be a “regular” fortune. A was not fortunate today so he tied his to the rail as is the custom, leaving bad fortune behind.

The temple proper is relatively small physically compared to monstrous edifices like the Blue Mosque, St Paul’s cathedral and so forth, but it’s Tokyo’s oldest temple and one of the most significant. It’s quite beautiful inside, and peaceful even loaded with tourists. I purchased a tiny charm, hoping for long life and good health. There were a variety of little charms and honestly we all need a little help sometimes. ( ◠‿◠ )

The temple roof has titanium tiles, which match the colour of traditional Kawara tiles but are 90% lighter and resist the elements much better.

A few more stops to see the Hozomon gate, the Nakamise shopping street and the Kaminarimon gate in the daylight, then it was time to hop onto the Ginza line Asakusa station to go from one end to the other.

Tokyo metro is great. The free wifi is awesome, the trains are clean, the seats are comfortable and the people make space. What more can you want in a transit system?

Shibuya crossing is what I expected, a huge overwhelming array of advertising boards hawking their wares and a spectacular number of people. Being 10am on a Monday I can imagine we are here at a quiet time, but everything is relative!

Walked up Spain Slope without realising, ok then?

Spain Slope (Supeinzaka) is a narrow, approximately 100 meter long pedestrian street with stairs leading up the slope to the Parco department store. It is lined by boutiques, cafes and restaurants, and was nicknamed for its resemblance to a Spanish street scene.

A little play-by-play of visiting the Nintendo Tokyo store. I kept track for reasons you’ll understand as we go.. 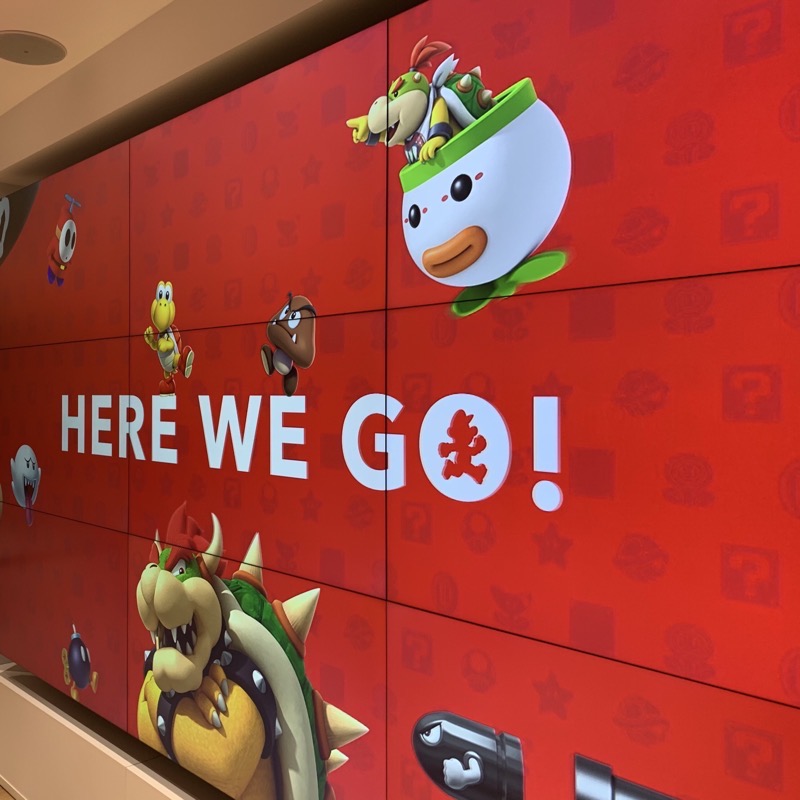 That was … quite the adventure. The store was packed even with the crowd control they’d put in place. The stairs smelt like… local farts. Better than the usual homeless-urinal smell we’d get at home.

By the time we were going into the store, it was about a two hour estimated wait. When we were leaving, it’d dropped to about 45 minutes, probably owing to the early morning rush and ticket holders eating up the available spots. Turns out, if we’d turned up well before it opened, before 0800 or so, there were no-wait tickets being handed out for entry at various times until 1030.

There was a fair range of different goodies from their various identities:

Sadly none of the shirts came in anything larger than an “LL” (XL)… if that was even available. I’m guessing their stock is smashed at the moment having only been open about a month.

I picked up altogether too many things, but it’s one of those “I’m unlikely to come back” situations I grabbed all sorts of goodies for myself and some others back home.

It took a lot of self-control and arguments with myself to avoid buying a Nintendo Switch. They sell them with whatever colour joycons you like, and it’d work out about 15% cheaper than at home once you factor in the tax-free pricing. The kicker is, I don’t need a console! I’ve got enough gaming equipment, tools toys and other hobbies at home without adding another money pit! So… I didn’t. FOMO’s making me grumble and look at every cheap switch here with sad eyes, but I really don’t need one.

Level 6 of Shibuya PARCO is called “Cyberspace Shibuya” owing to the fact it’s dedicated to games and anime culture. There’s an eSports bar with secure, high speed wifi, chargers at every table and sports-bar like TVs everywhere showing various matches. There’s the aforementioned Nintendo store, plus a “Jump” store and a NAMCO-branded one. There’s a few other little niche stores as well. 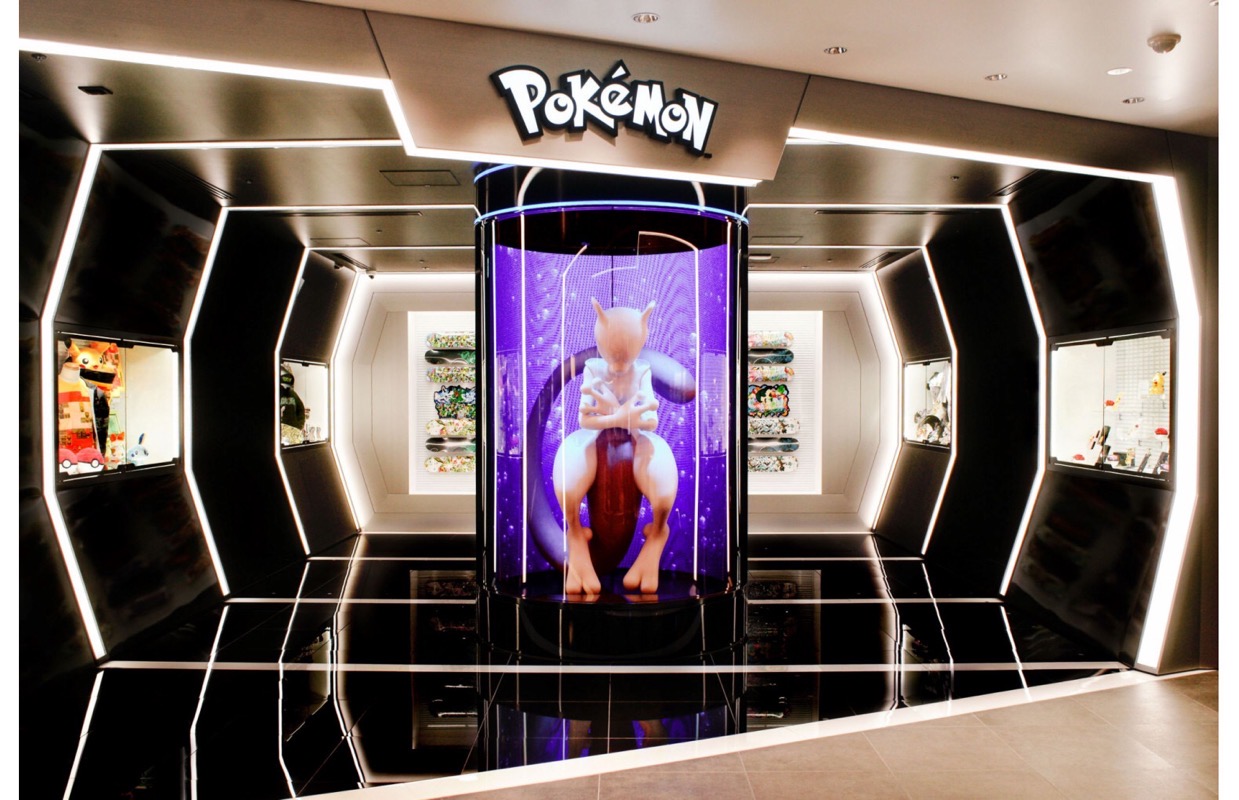 The main reason we ended up finding out about the whole place was the brand-new Shibuya Pokémon centre with a Mewtwo theme. As I’ve been told in the past, GAME FREAK does a good job of making plushies and marketing to the Pikachu fans, but unless you like those things there’s quite a limited set of goodies. There were some heavily overpriced bags and “trainer accessories” and we left with a plushie each and some little nick-nacks. I guess that’s the problem when you’ve got… 890 different monsters, according to the list on PokemonDB.net to put to market. Maybe with the advent of hyper-fast flexible 3d printing you could select from your chosen favourite and get a customised toy? 🤣

By the time we’d stuffed our bags full of gaming goodies, our stomachs were growling so we dove down to the basement to find some food. Shibuya Sushitsune was about the only real Japanese food that I liked the look of, and with it being a “Sushi train” I convinced A to go in. Much to his chagrin, it was less train and more sushi, leaving few options for the fish-hater.

I had a very pleasing meal, three plates of nigiri, three tasty experiences:

They were delicious, as you’d imagine. Fresh fish comes from island nations, and oh boy was this fresh and delicious.

Next we visited Tokyo Hands, another “everything” store with a homewares/craft bent. Many floors of goodies, I honed in on the ones dedicated to home DIY and craft. There’s a whole section dedicated to wood, with a selection of things I could only imagine having access to at home. The tools available in every possible combination were spectacular, less heavy machinery, more small artistic stuff.

I picked up a few goodies, a japanese hand plane and some 🔰"new driver" car magnets for my toolbox.

I thought it was cute that the stairs showed how many kcal you’d burnt by climbing them.

Their pen selection was broad but relatively low-end. There was a moderate selection of fountain pens from Pilot, Century, Cross and a few other brands, but none of the real high end things. I got to play with a Century 3776 and a Sailor, but nothing screamed “you must buy this”.

We headed back to Shibuya crossing, looking to head to Shinjuku station to explore that area a little. By this time it was 1500, so there were a lot more people around and the crossing had a lot more traffic.

We visited Hachikō’s statue, a faithful dog who would wait at the station every day, even until nine years after his master’s death. What a good pup. 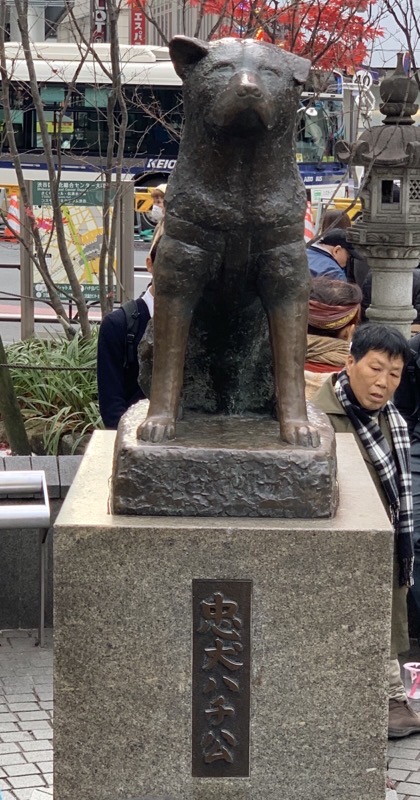 There were a lot of people just hanging out in this area, and along wih that came the hawkers and the leeches. I saw at least a couple of different sets of people approaching cute girls and offering them jobs in modelling (or that’s what the logos said). This guy was asking people if they knew what YouTube was, and if they’d subscribe to his channel… that’s one way to do it I guess?

Shinjuku is a massive train/bus station and the surrouding area is known for its many shopping options. I wanted to visit the grand spectacle of Yodobashi Camera. Made up of 13 different buildings, Yodobashi Camera, like BIC camera before it, is split into various categories and packed to the gills with goodies.

We cruised around a bit, checking out the cheap computers, the game consoles and accessories the likes of which we can barely get shipped to Australia, let alone see and touch. While heading into the games and toys pavilion, we saw this nightmare from my youth. I can’t believe they still make these things…

After that, it was time to leave A with his friend to hang out for the night, and me to go on more adventures. I checked out the local BIC Camera store and found myself buying a Filco Majestouch 2 Convertible Tenkeyless. An 87-key mechanical combination bluetooth/USB keyboard that I can get at home, but for over two and a half times the price. ISO key layout, bluetooth and cherry browns? Sign. Me. Up. I’ve been considering something like this for my laptop for a while, so it was nice to find. Upon turning up to the register it was clear that I wasn’t local, so I got asked for my passport and the tax-free discount applied. When I started paying with my chip-enabled MasterCard, another was applied… and then another for reasons I still can’t quite explain. Either way… it worked out well for me! 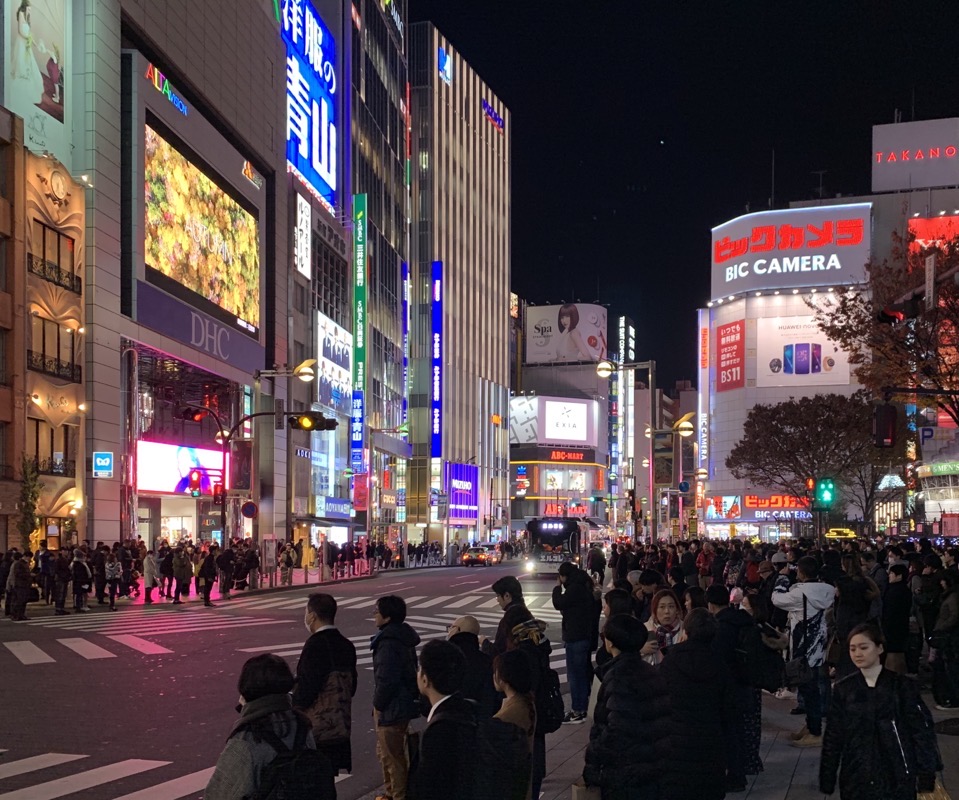 Next, I went in search of funky fountain pens. I did some googling and found that a local store called Kingdom Note was highly regarded for its new and second hand stock. Having headed towards the Kabukicho area looking for other shops, I headed to what I thought was the store. Unfortunately, it seems like there’s multiple things in the area called “Kingdom Note” one of which seems to be a garage. Thankfully I realised this before walking all the way there, having tried to find out when the store would close because it was approaching 8pm. Only a few KM walk wasted, I hopped a train back to Shinjuku station and walked to the actual location of the store… directly behind Yodobashi Camera. Ugh.

A lovely little store with a fantastic selection of pens, if you’re looking for most price ranges of brand new and second hand pens in Tokyo/Shinjuku, I’d say check this place out. The second hand wall is spectacular in its range, and the new goods are gorgeous. I finally got to see some Nakayas in the flesh, and they’re just gorgeous.

Again, sense and budget won out, so no expensive pens for me. The sailors are pretty, but not the ones they had there.

Off to Shibuya for the Blue Cave Illuminations, a yearly spectacle of light using the local trees and a truly phenomenal amount of LEDs. This year it covered 800m of path between Koen Dori and Yoyogi Park. A beautiful and magical place.

Slightly related, I’m hilariously good at unintentionally photobombing in these kinds of situations. Apologies to the tens of thousands of people trying to take photos and ending up with my head in the shot. 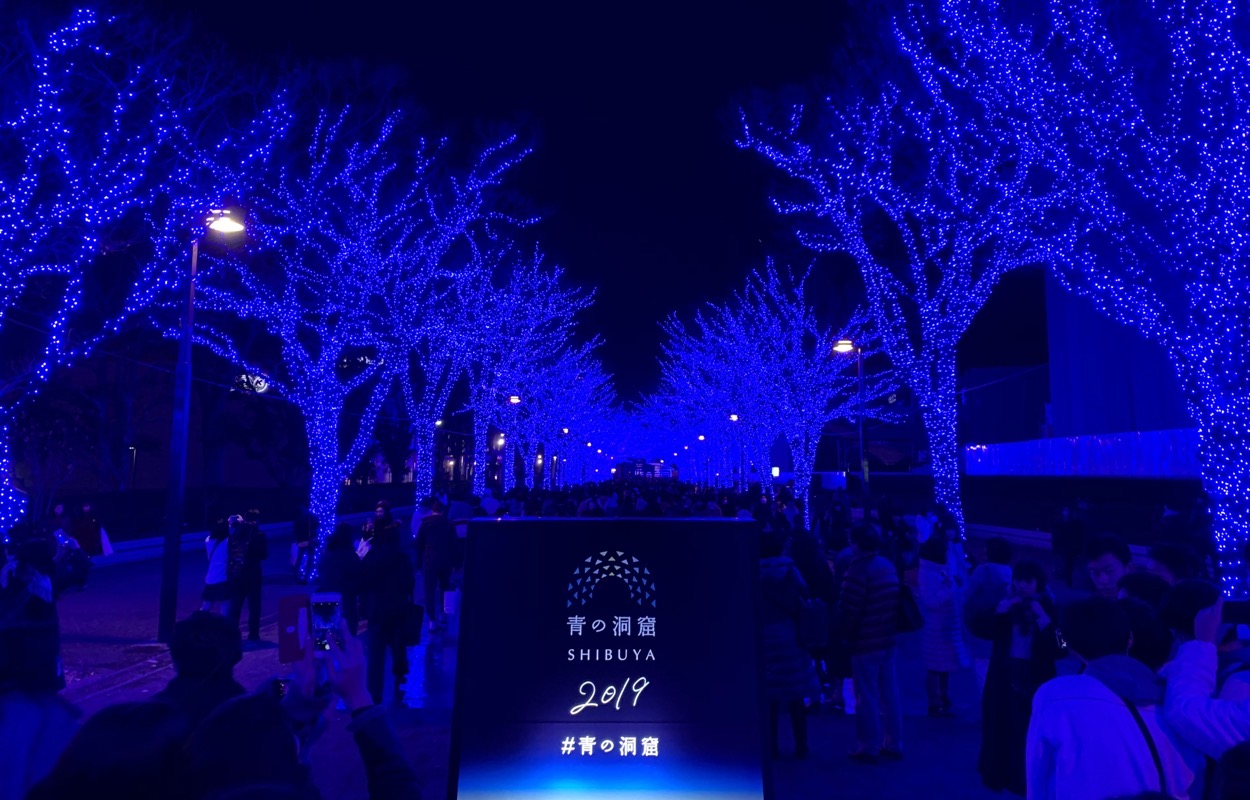 After that, a short walk to Harajuku station, then a train back to the hotel.

I grabbed curry. It was great.