Today we set out to find the Mozu Kofun tombs in southern Osaka. Our first train ride without the brain-melting pre-game of a long day’s transit. Namba station to Mikunigaoka Station didn’t take too long and it cost maybe… three dollars? It’s great what a huge population can do for infrastructure budgets.

The “pen pen pen” noise of train crossings is one I’ve known as an ambient noise for decades and brings back so many memories of anime and other media. Riding on the train today, it’s such a strange feeling to finally understand how much of the city culture of Japan revolves around them. Every couple of blocks you see a tiny side street crossing the line, with people on bikes and in cars waiting for the ever-present stream of trains.

A recently declared world heritage site, the tombs were built in the late 3rd-6th Centuries. The lagest is Nintoku-tenno-ryo Kofun, also one of the largest single burial mounds in the world, its keyhole shape being 486m long and 307m wide at its base. Surrounded by a triple moat, it’s quite hard to get a sense of the scale of the place at ground level. It’s well worth reading the story, however apocryphal it is. 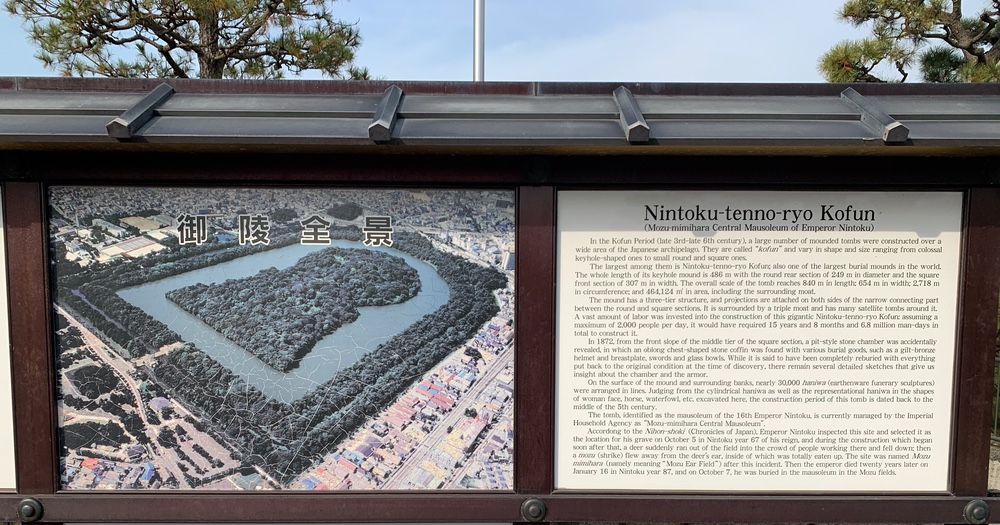 Starting from the north end of the colossal complex, we wandered down the east side of the Kofun perimiter, enjoying the sunshine and the signs and sounds of suburban life. I’ve said it before and I’ll say it again, the car culture here is so awesome, with such varied models and history that we in Australia just never got. And… then there’s “barn finds” like this beauty. 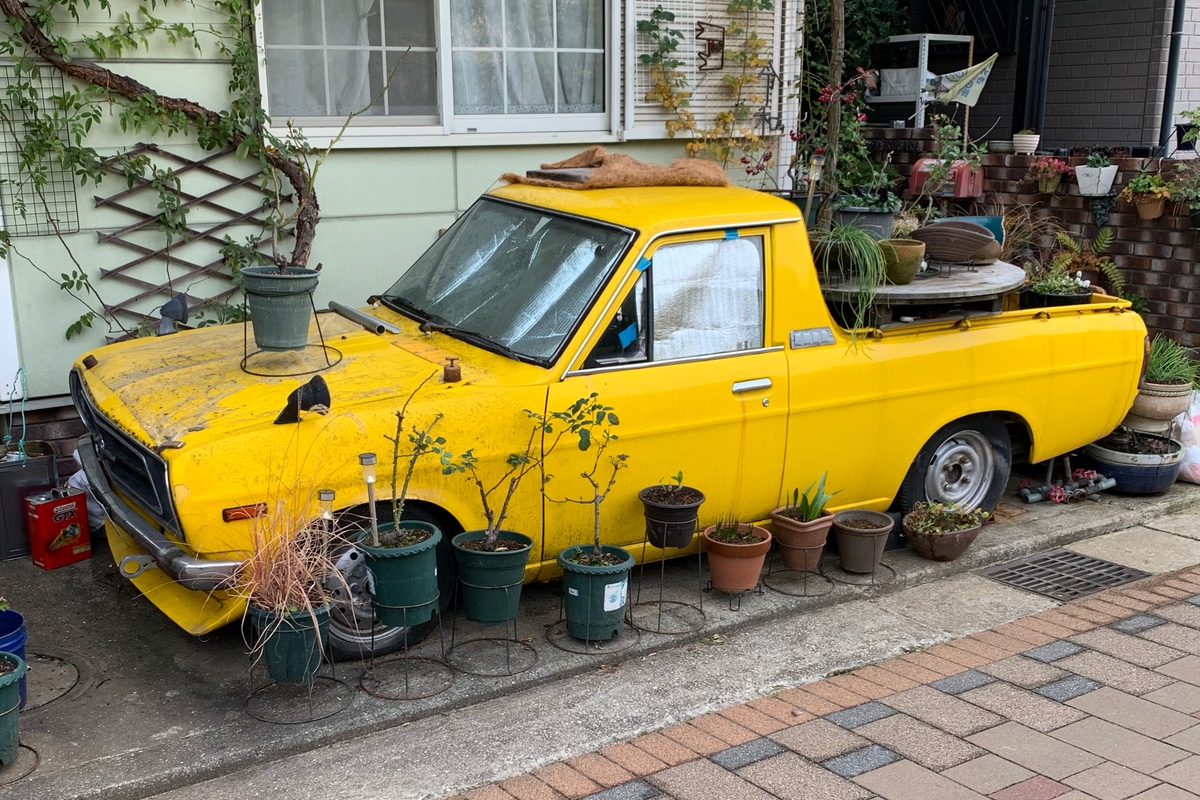 Once you get to the “base” of the Kofun, there’s a peaceful visitors area made of stone with a small shrine which we couldn’t explore because it was all closed up. 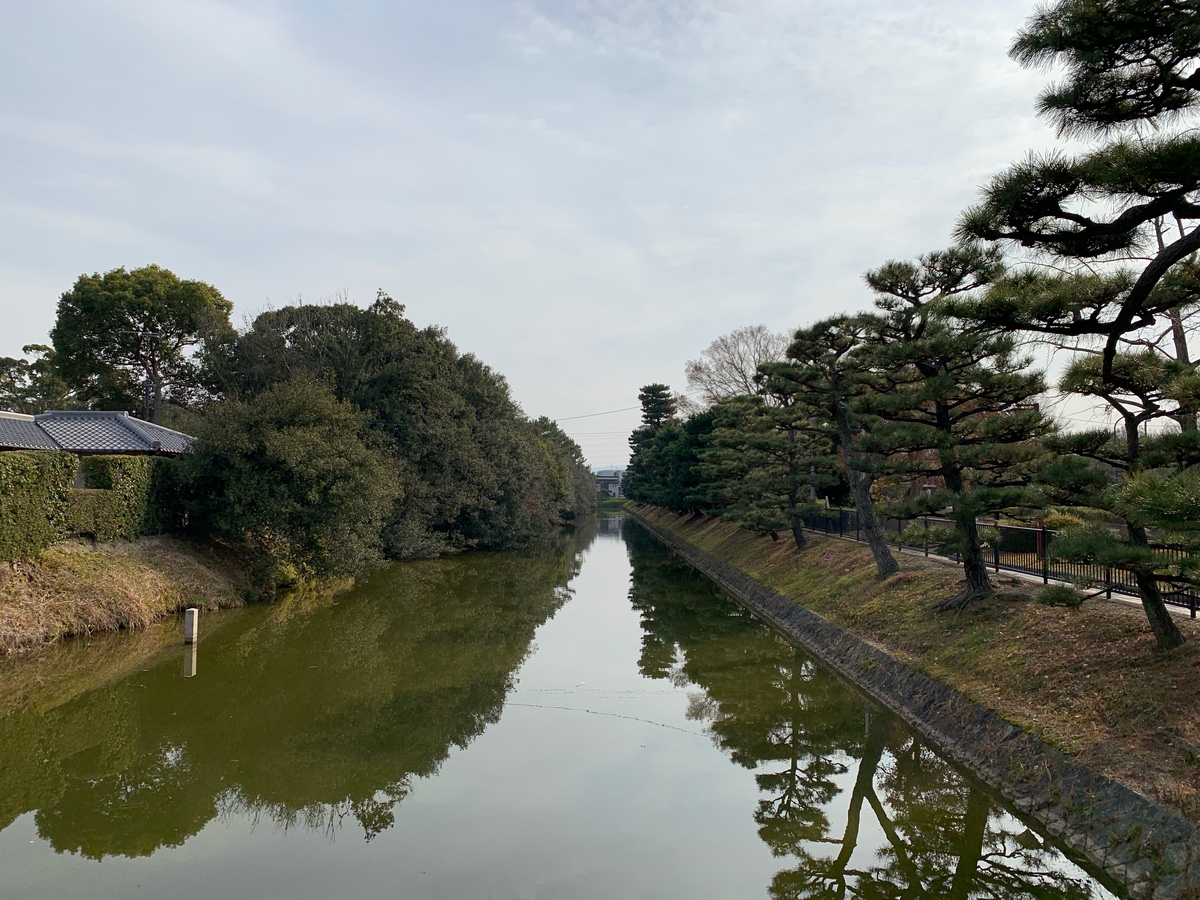 This pup we had seen earlier and clearly felt like they were the owner of the local area. When they were inside their house, waiting for their owner to get ready and go for a walk, everyone got to hear how excited they were and how slow their owner was going. When parked outside the shrine, it was their duty to accept all the attention of people leaving; something which was quite the burden, but someone had to do it. 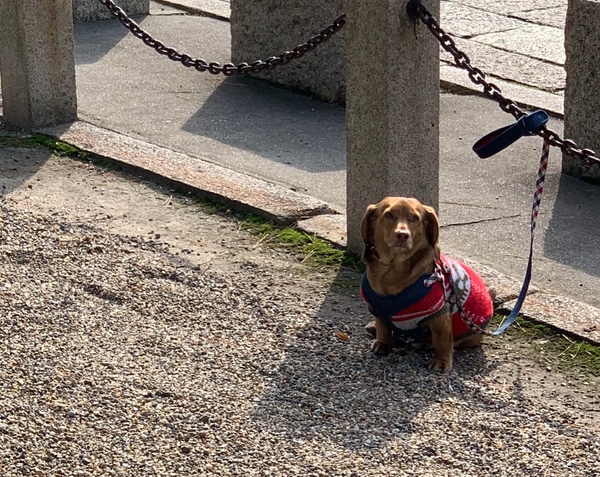 We wandered around the Kofun group complex, enjoying the scenery and completely not understanding anything about the various shrines or the Tour de la Paix monument. Even the commenters on google maps can’t make any sense of it, sadly. Something to learn about next time I’m here, with a tour guide. It was lovely and peaceful and quiet compared to the city madness of yesterday, which was nice. 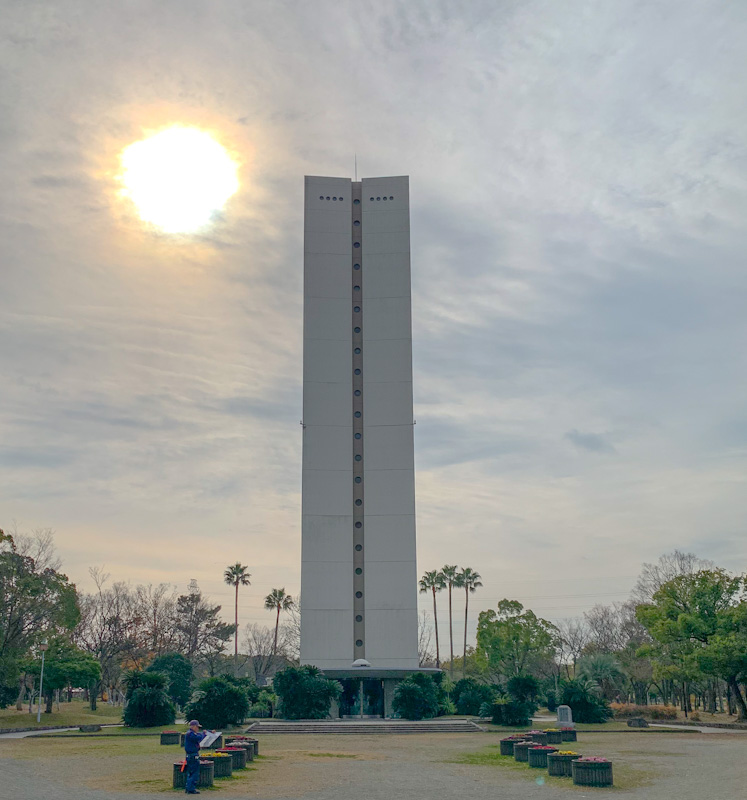 Corn soup in a can. Hot. From a vending machine. This is the life. 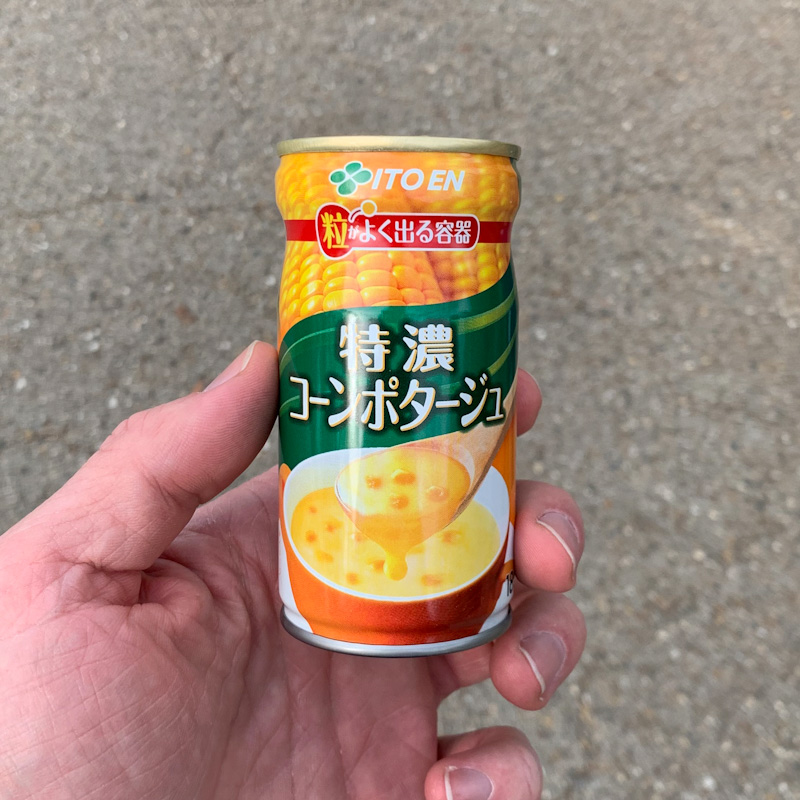 The fishermen enjoying the lake in Daisen Park had it made though. What a lovely day to just sit and wait for a nibble.

I’ve always wanted a Higonokami knife, the typical folding knife of the type carried by school children and men alike. Since the early 1960’s the manufacture of officially named versions has been the sole privilege of the KaneKome (Nagao) brand. Tripadvisor recommended a stop in at Tower Knives Osaka in southern Osaka, so we popped in on the way home from the tombs. It was a few minutes’ walk from JR Tennōji station, so we stopped for lunch in the food mall then wandered up to the store. 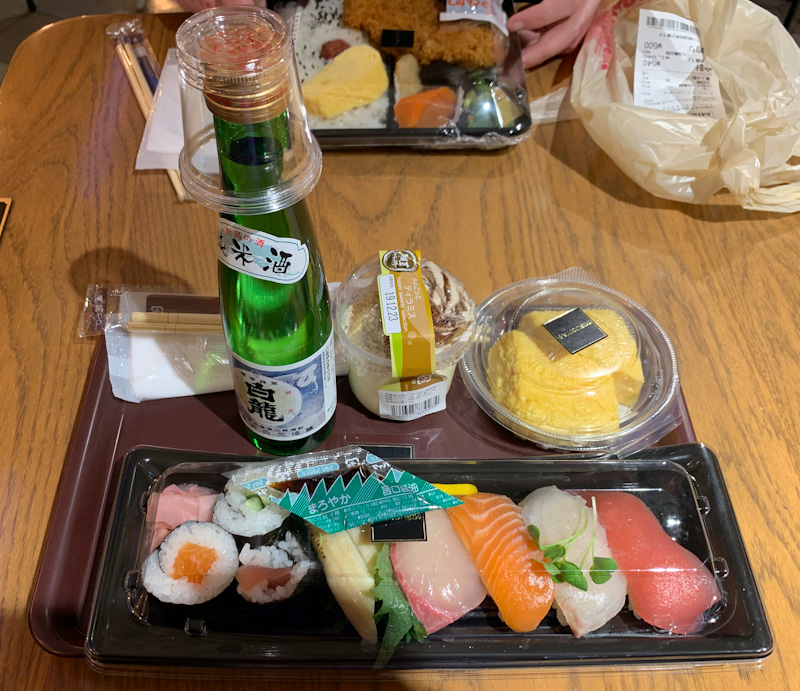 The store, located just east of the Shinsekai area of Osaka is only small, but contains an amazing collection of cutlery from various local regions and styles. From the tiny sewing scissors to the well-over-two-meters-long tuna knife, every imaginable kind of Japanese knife and manufactory is represented. I had to engage the most powerful of my “you don’t need this” senses, because there’s some incredible works of art in this place.

I was so entranced by the forged beauty that I mostly forgot to take photos. My prize, however, did not escape me and I purchased a lovely little white steel Higonokami to take home with me. To my delight they offered it tax free, so it must stay sealed in its packaging until I get home; due to its truly terrifying nature it must travel in my checked luggage. All just-over-two-inches of its blade.

On the way there, we saw this sign at the end of a pedestrian tunnel. I really wish I knew the story behind this. A mystery for the ages I guess…

Realising we were in an early 1900’s shopping and eatery district we wandered around a little more, collecting our first Takoyaki of the trip. Cooked fresh while we wait, these balls of flaming-hot octopus and carbs made for a delicious energy boost (and mouth-searing injury fest for the Small Child). 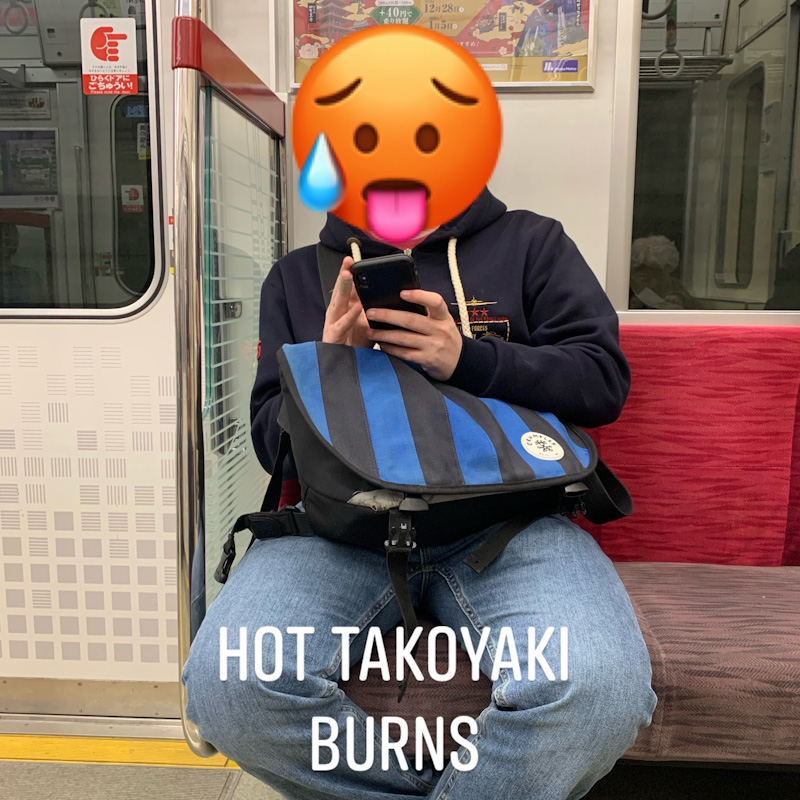 Suffice it to say, he was not amused when I shared this to the group chat 🤣 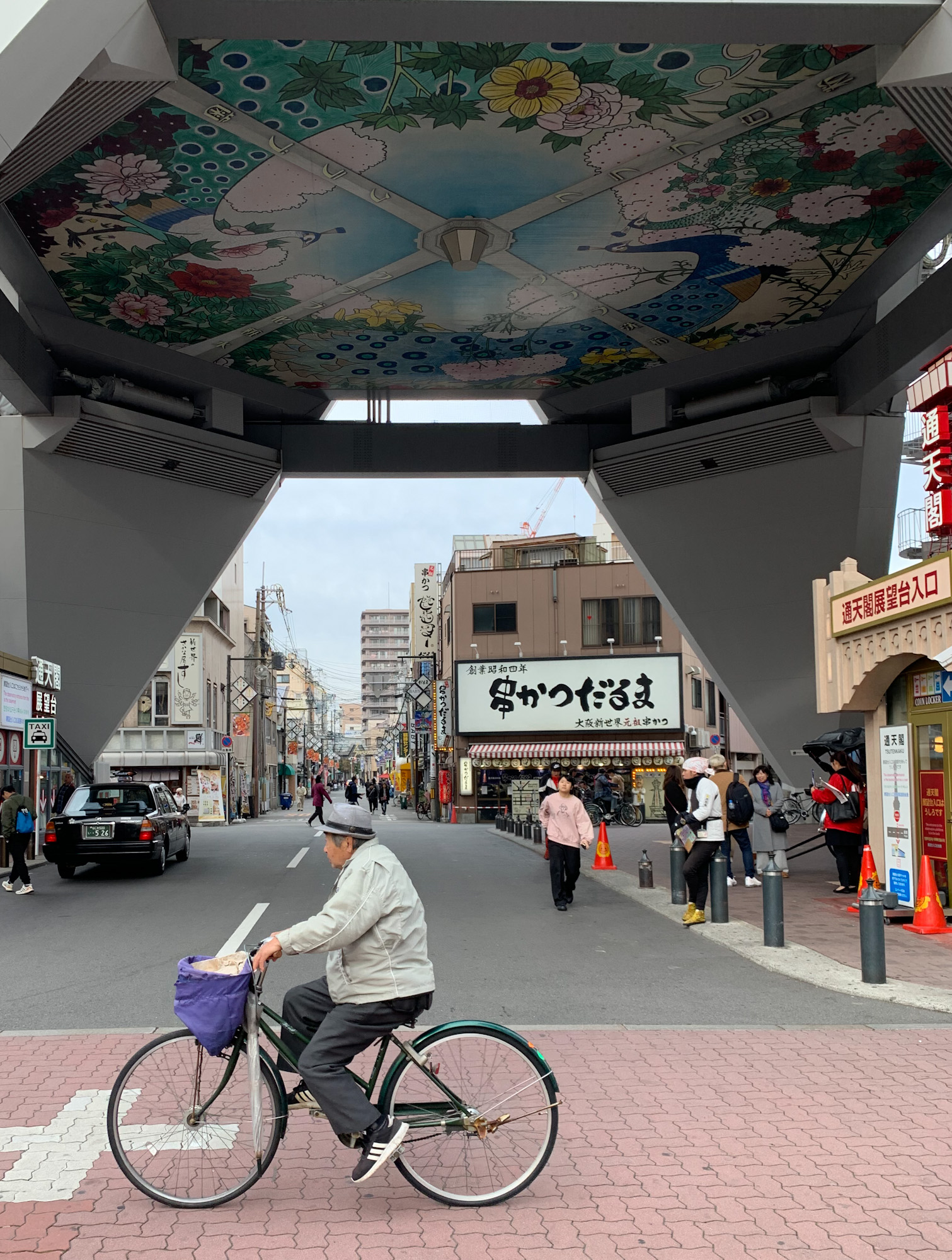 We made our way back to Dobutsuen-mae station, heading for Namba station, looking for
Hozenji Yokocho, a small pocket of super-old buildings within the electric glitter of Dotonburi. I think this is another place I’m going to have to come back to with a local guide to show me more about it, because there was a lot of shutters and a lot of old architecture, but not much that I could make any sense out of, sadly 😔

This lobster though, what a hipster! 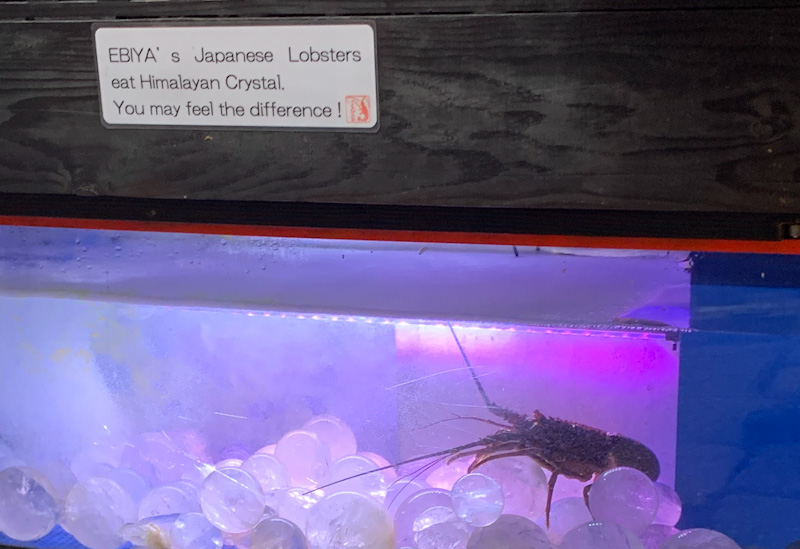 We traipsed back to the hotel, stopping for a drink on the way… tonight we dine in Zauo fishing restaurant, where you catch it before you eat it, then you get to choose how it’s cooked. I’m looking forward to it, which makes one of us! 🤣