The main goal today was to get JR train tickets for the rest of the trip. We’re going Osaka > Tokyo > Kyoto > Osaka > Hiroshima > Osaka > Kansai airport. This’ll happen over a few weeks, so the calculators I looked at showed it wouldn’t be worth the ~800-1100 for a 21 day JR rail pass. Our trips are occurring over about 23 days and we aren’t doing that many, so we opted to do it all as individual passes.

This should be an easy feat, but as has been the case with this particular adventure there were some delays… we grabbed breakfast from a local family mart, then wandered to the JR Namba station. A slightly more aimless, wiggly route than I’d normally take, as I’m still getting used to the scale of things compared to what’s on the maps.

Once we were there, the nice man and pre-prepared list I pre-printed made for a quick process of working out which tickets we needed. He typed up the price of the tickets on a calculator (146,000¥). Being silly, sleepy tourists, we placed 15,000¥ on the tray. Confused stares were exchanged, and an uttered swear was muttered before realising how much that actually was. At the current exchange rate, the tickets I expected to be about $800 for both of us (on the high end) were more like $1,040 per person. I knew I’d asked for “green” confirmed-seating tickets, which was going to increase the price, but the calculator I had been looking at clearly had some poor UI when displaying the full cost. (I looked later and down the bottom, in smaller text, under a big table, it showed the “full” price rather than the summary in the table)

We discussed it and definitely didn’t have raw currency to pay, so I pulled out my MasterCard and tried to pay. Nu uh. The machine only allowed for magnetic card stripe reading. Some combination of that, the fact we’re in Japan and my bank (CUA) being assholes just didn’t want to let it work. Try smaller transactions? No bueno. Time to find an ATM!

Being in Namba, there was a big list of banks and ATMs on Google maps, so we set out to find one. That was easy enough, there’s one right next to the JR office. Nope, a weird error message about credit cards not being allowed was dutifully displayed. OK, try another. After about fifteen minutes of trying to negotiate the three-dimensional mapping mess of the local area, another one was found… no go again… and another… and another. Uh oh.

Eventually a JP Bank ATM was found and much to our delight, it allowed us to take 50,000¥ out. Nowhere near enough for green tickets all the way, but having talked to the guy about the time of year and how busy the trains were, we decided to go back to “not green” tickets for everything but the “very busy holiday-day” train on the 29th between Tokyo and Kyoto. After finally sourcing the currency we took some hilarious detours - there was no real rush to get back to the JR office, and there’s so much in Osaka to explore!

On a side alley I bought my first gachapon - a Suzuki Jimny! 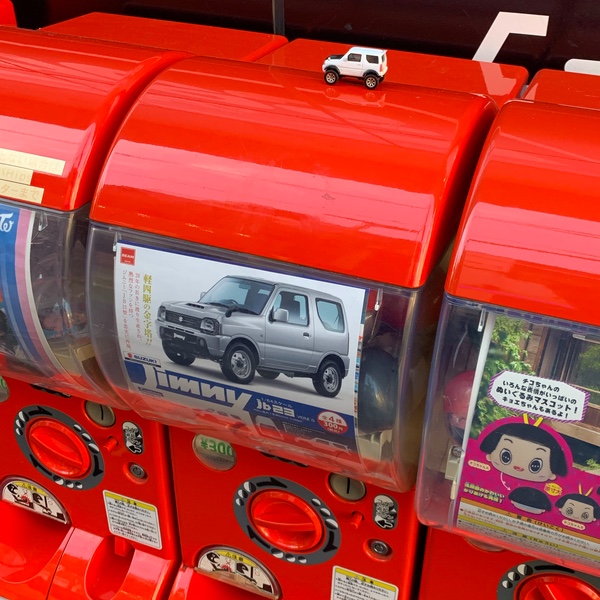 We ended up in BIC Camera Namba. The Small Child needed his own SIM card and I needed to explore the eight floors of hilariously noisy goodness. If you’re sensitive to loud noise, ear worms or sensory overload, this isn’t the store for you. Japan cities are probably not the places for you, but this place turns it up to eleven.

From the 10 litres of scotch (2x4l, 1x2) at about $20/litre, to the incredible range of childrens toys, toilet seats, watches, fridges and everything else you could possibly plug into a power point or associate with something that does, this is the place to come. If you’re into photography it’s in the name. Over and over I marvelled at the amazing range of goods on display; we just don’t get anything near this scale in Australia.

Literally every possible combination of camera filter I could even imagine was here - and that’s just the filters. There was a whole row of aisles just for tri/mono/whateverpods for camera gear.

I derped my way through things, picking up a handful of impossibly cheap Zebra pens and a Pilot Kakuno demonstrator fountain pen.. with cash, because they couldn’t accept my card/Apple Pay. 😭

Suffice it to say, there was eight levels and it took about two hours to get through it all. Amazing, literally mind blowing, and I think my eardrums have some permanent damage from the experience. So many recorded ads and jingles and everything else going on, and I’m closer to the roof than most.

After getting waylaid by navigational hilarity in the Namba walk a few times (and ending up in Nipponbashi, the east end of the subway) we went back to the JR office and got our tickets. 110,000¥ later we’re riding Shinkansen for most of the trip, with the short jaunt between Kyoto and Osaka using the slower local trains. 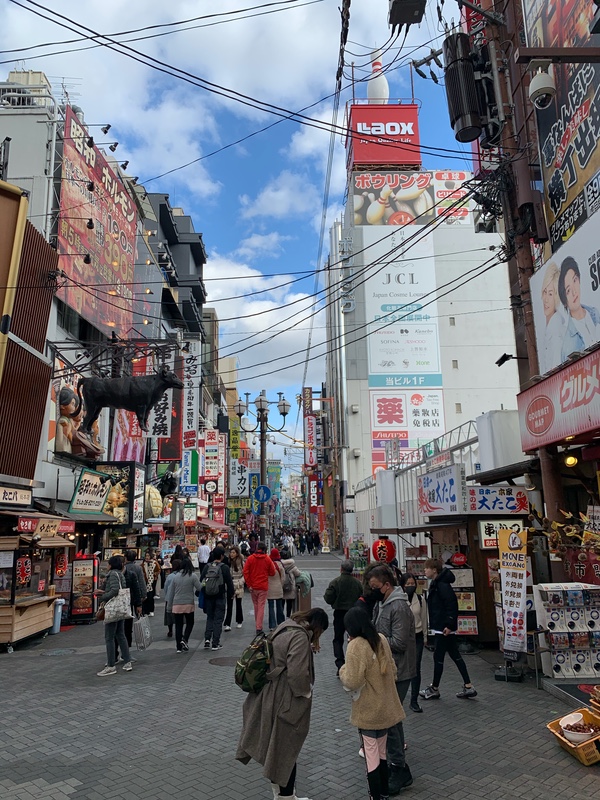 Lunch was at San Marco Nambawalk, an vaguely European-style eatery (no chopsticks!) which turns out to be part of a big chain. They happily took my credit card, which is becoming an increasingly confusing interaction. Pork Katsu curry, cooked to perfection with a nice bite to the curry.

After finally obtaining tickets we were a little late to head out to the palace, and it’s much closer to the hotel we’re staying at on the way home, so we decided to just keep wandering around the area.

I dragged SC through the Don Quijote Dotonburi store, six floors of sonic and physical assault masquerading as a variety store with an oval ferris wheel on top. It’s truly incredible how much they can cram into one hilariously noisy building, and I still can’t work out if the high pitched squeal that was ever present was some issue with the sound system or an intentional attempt to get people out ASAP. 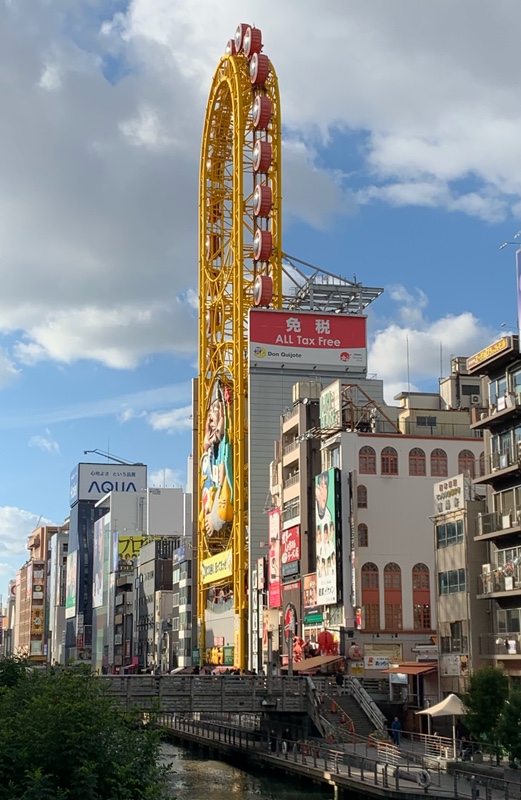 On a whim, we passed through Kuromon Ichiba markets. A great place to walk through with an empty stomach, but mine was full and I wasn’t in the headspace to negotiate street food options. I’ll definitely be coming back here when I can; the seafood, meat and fresh fruit options look like quite the gastronomic adventure.

While wandering through Nipponbashi we staggered into Super Potato. Like so many shops in this area it doesn’t look like much - but oh what treasures we found inside. 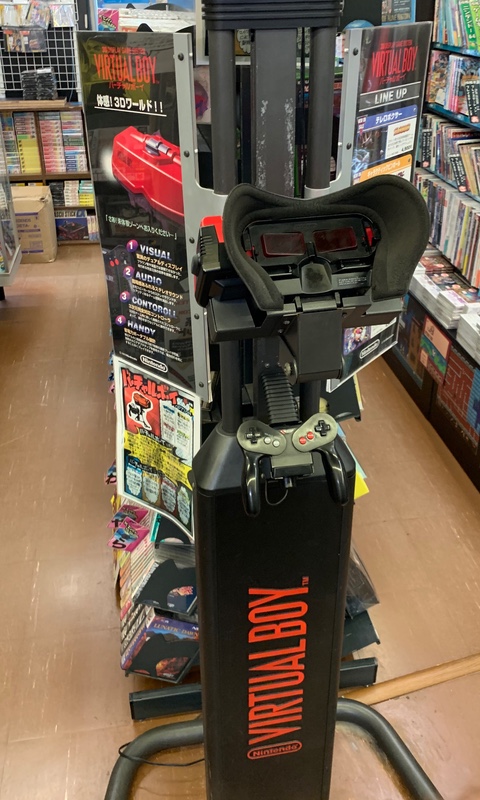 I finally got to play with a Virtual Boy. I could have bought one if I really wanted to live through that red and black monochrome virtual lifestyle. A curious device for sure, it’s simultaneously surprising and not that it flopped in the market. 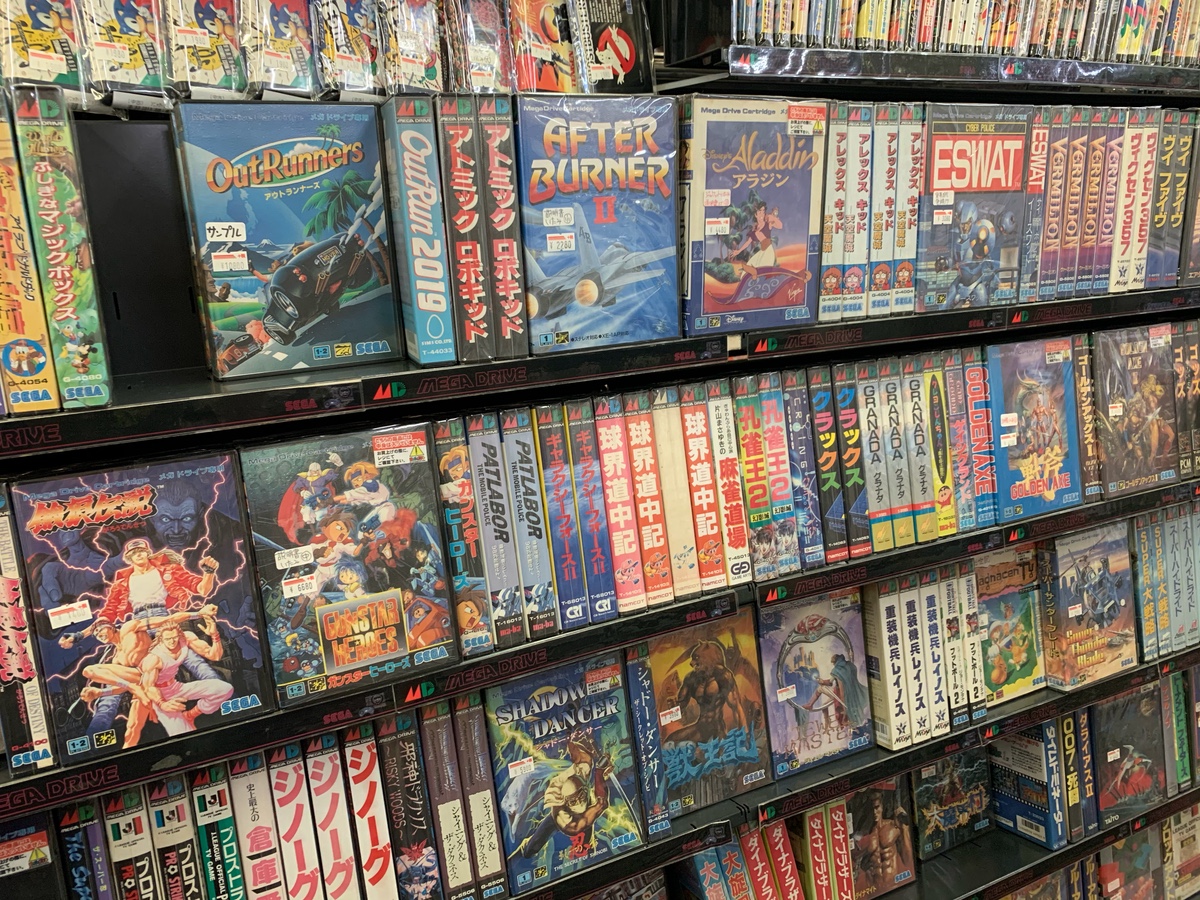 NEO GEO’s in shrink wrap, $5 playstation ones, Shelves full of N64’s, Famicoms, Gamecubes and everything else in between. If you like console or portable gaming, especially with a retro twist, this place is worth a visit.

We’ve staggered back to the hotel as our feet are well-worn and needed a rest, but we’re going back out for some good local food later. 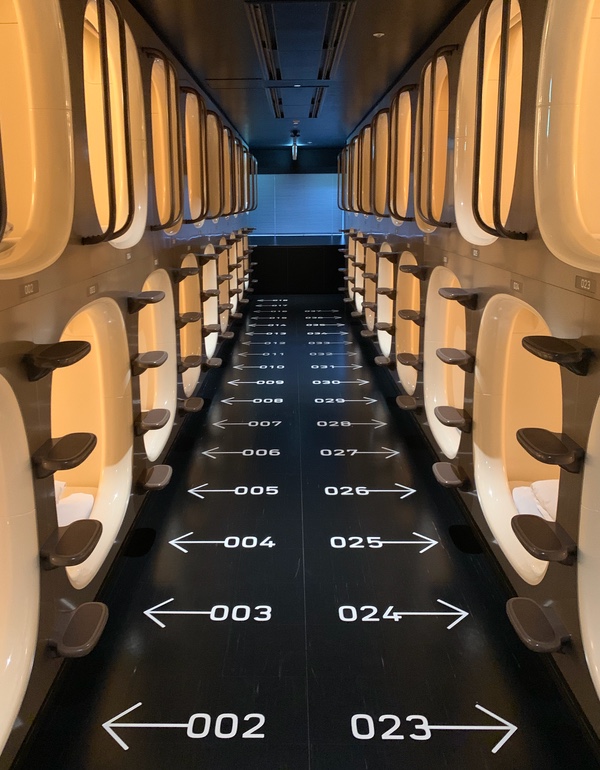 (The thing in my phone says we walked over 19,000 steps and a little over 16km today, which seems right, dang.)