The rough explanation is 37 days away, nearly two weeks in Iceland, then the rest doing a lap of Eastern Europe. Being from Australia, we can’t just do a merry jaunt to Europe, hence the extended plans.

The flights were… as to be expected. Brisbane to London via Singapore, with a six hour stopover. I sleep on my stomach typically, so I just don’t sleep on flights. Not helpful when you’re in transit for two days! :) The lovely Premier Inn Heathrow Terminal 4 was welcome place to lay our heads for 24 hours or so until the flight to Iceland. 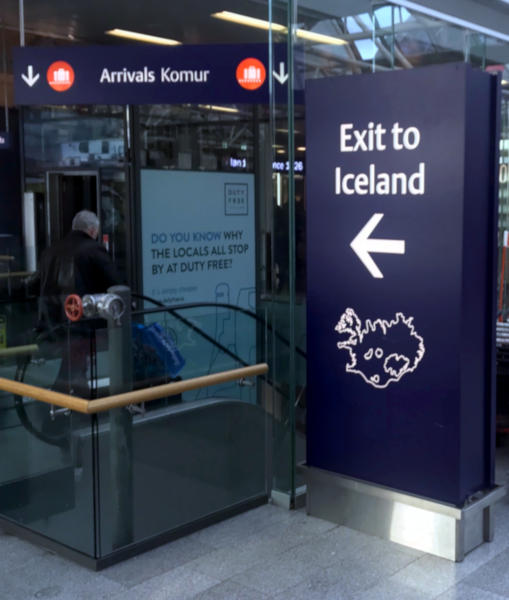 I hit this. With gusto - we should all travel like we’re ghosts, not invaders. 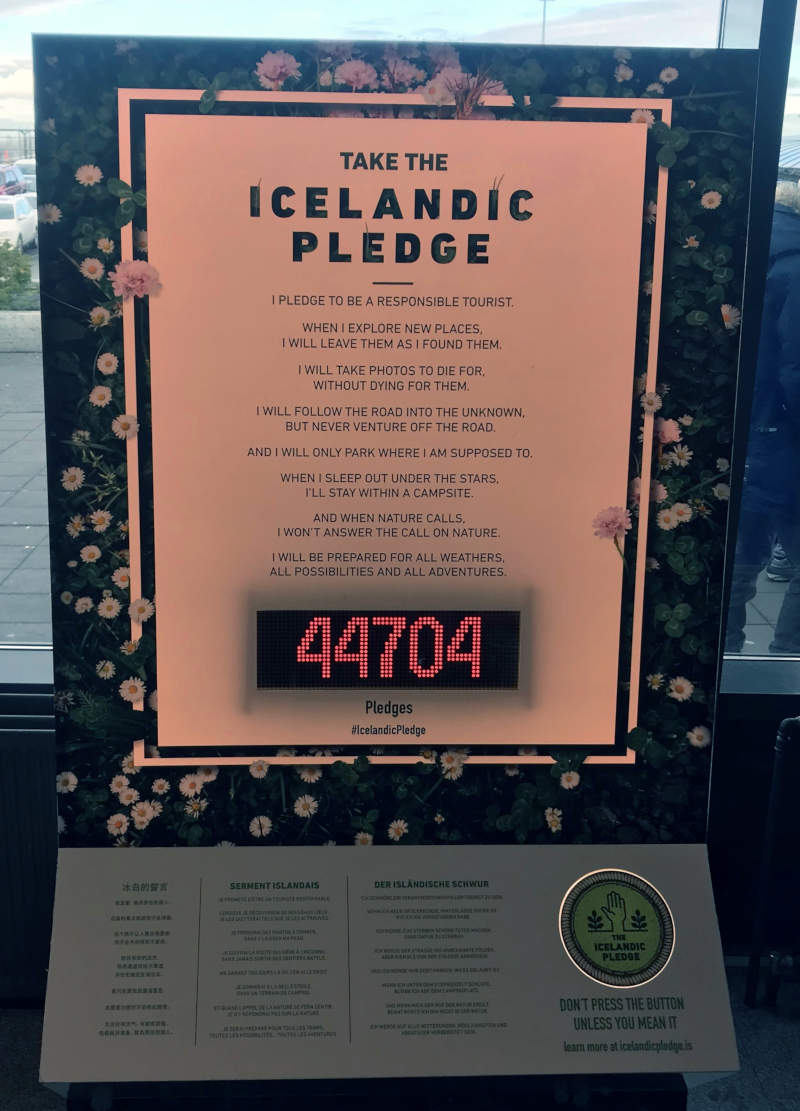 The Sun Voyager was a stop on the way to our AirBnb, the light was interesting (and the wind was bone-chilling-ly cold) :) Built to celebrate the 200th anniversary of its host city, it’s a curious piece of civic art that is both popular and not ugly in the slightest :) 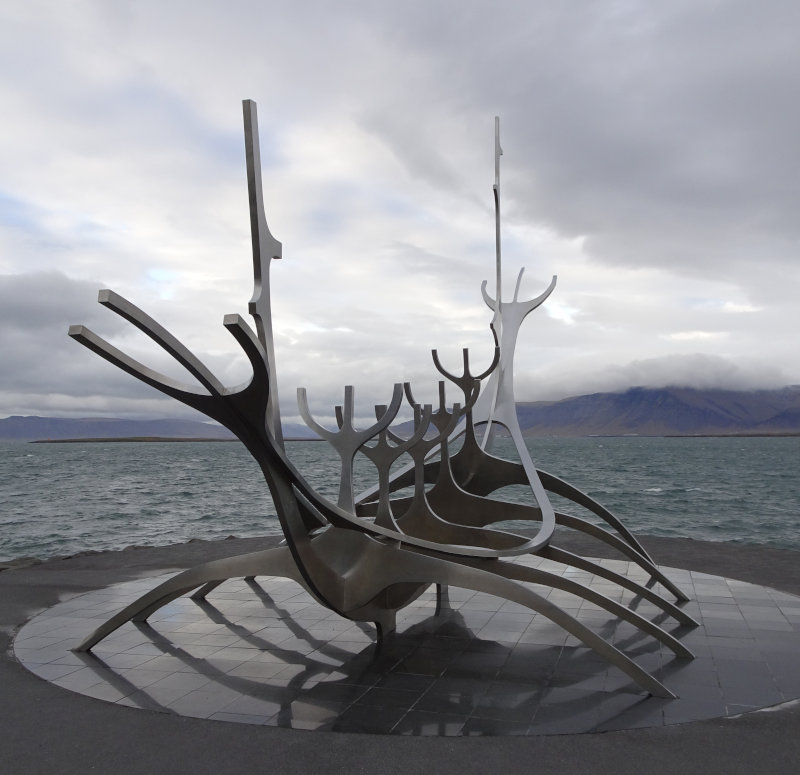 So far we’re on day 2 in Iceland and we’ve already seen and done some amazing things.

This, right here, was one thing I was looking forward to a lot - trying some local delicacies you’ll never get at home. From the left we have Horse Carpaccio, Minke Whale, and Smoked Puffin. There were quite a few different places offering these options, but we ended up at Sæta Svínið (Cute Pig) - a gastropub with a lively manner which we were lucky enough to get a table at on a Saturday night. 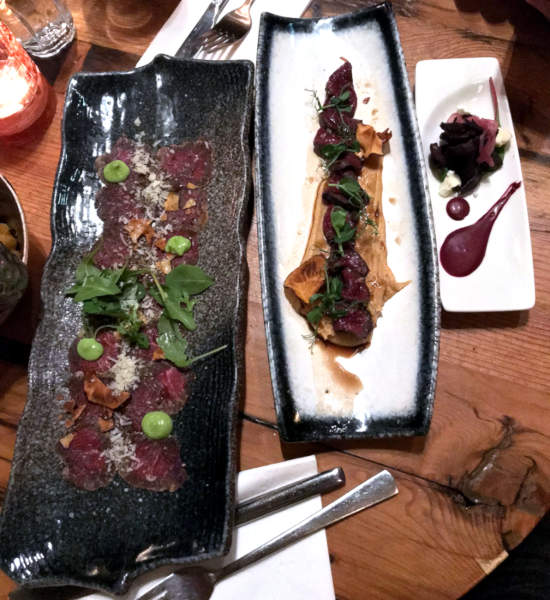 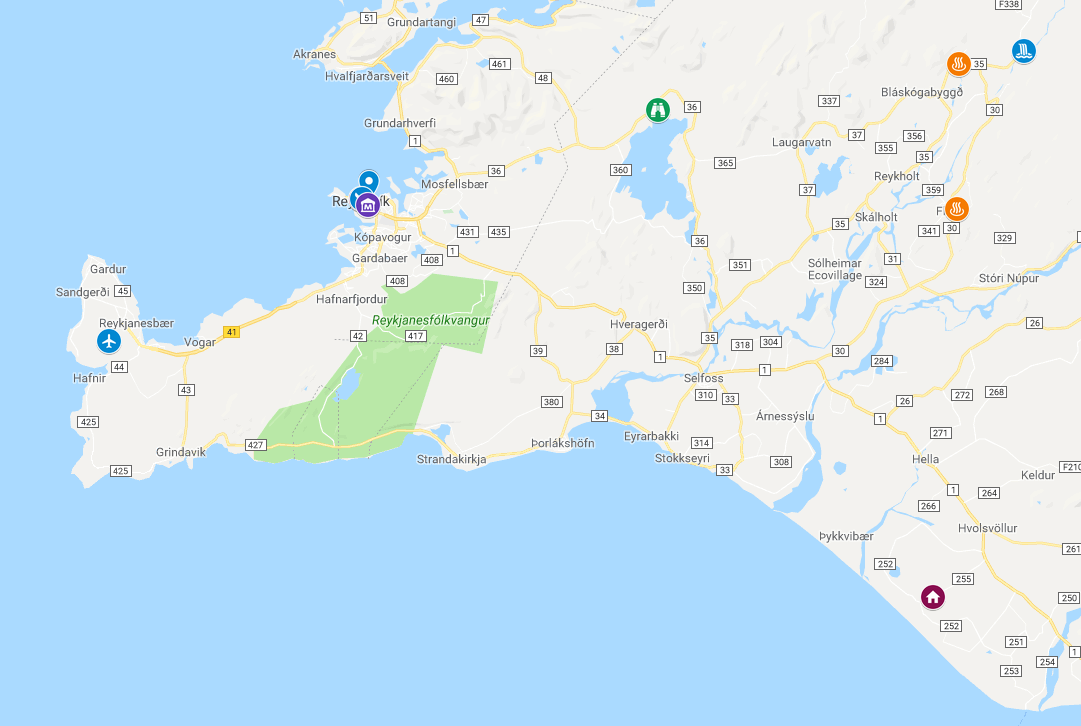 After a pretty rough night’s sleep at an AirBnb also called House of the Spirits - nothing to do with the accommodation - more to do with some seriously rowdy neighbours - we’re off to see the “Golden Circle” of Iceland. Þingvellir, Gullfoss and Geysir. 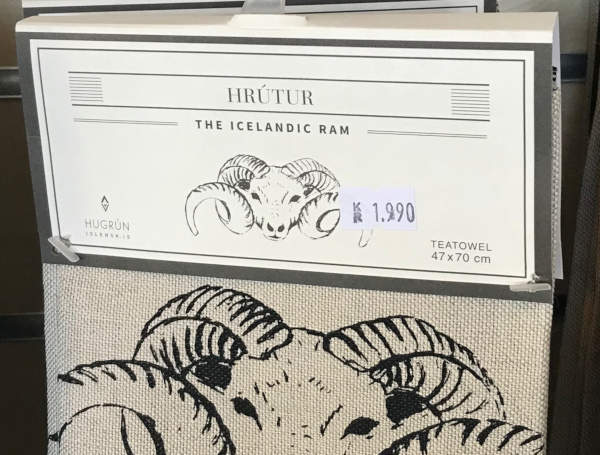 The name Þingvellir is derived from the Old Norse Þingvǫllr, from þing (“thing, assembly”) and vǫllr (“field”), meaning assembly fields… The site takes its name from Alþing (Althing), the national parliament of Iceland, which was founded at Þingvellir in 930 and held its sessions there until 1798. 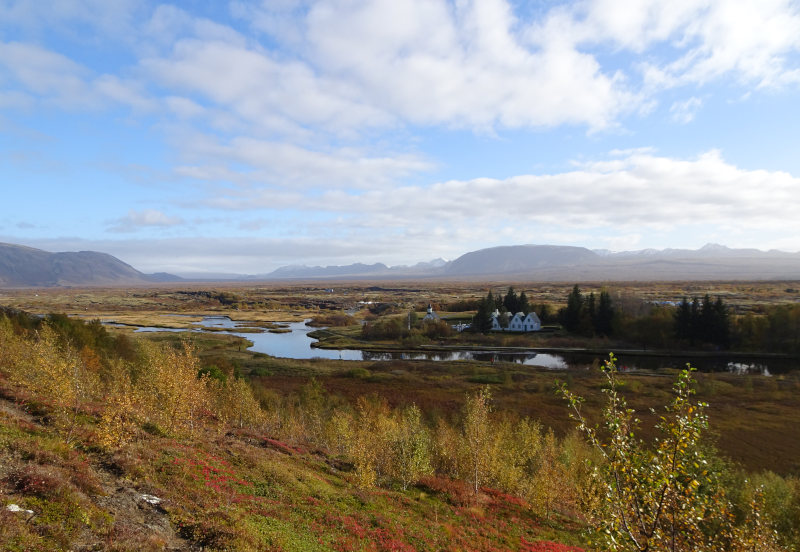 To its south lies Þingvallavatn, the largest natural lake in Iceland. The light wasn’t great for photography, but the site was amazing for its lava flows and breathtaking scale. 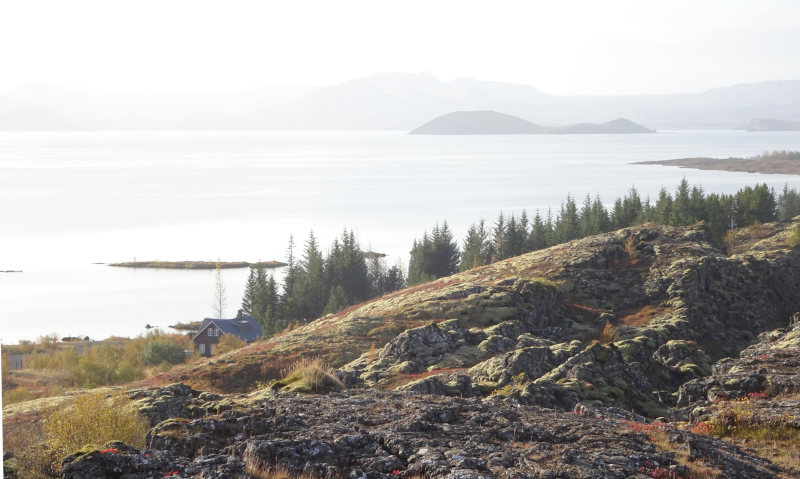 Gullfoss - “Golden Falls” has a pretty spectacular history, for a waterfall owned by some random farmers in the middle of nowhere :)

During the first half of the 20th century and some years into the late 20th century, there was much speculation about using Gullfoss to generate electricity. During this period, the waterfall was rented indirectly by its owners, Tómas Tómasson and Halldór Halldórsson, to foreign investors. However, the investors’ attempts were unsuccessful, partly due to lack of money. The waterfall was later sold to the state of Iceland, and is now protected.

Sigríður Tómasdóttir, the daughter of Tómas Tómasson, was determined to preserve the waterfall’s condition and even threatened to throw herself down. Although it is widely believed, the very popular story that Sigríður saved the waterfall from exploitation is untrue. A stone memorial to Sigriður, located above the falls, depicts her profile. 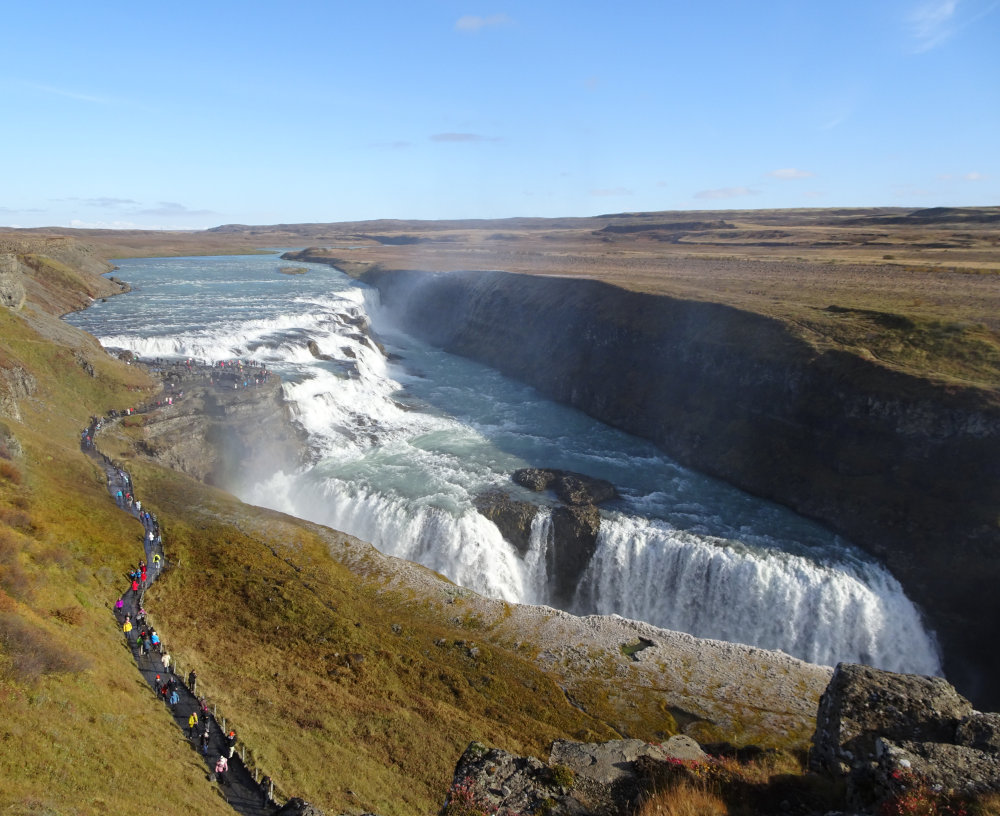 In my life, most every time I’ve gone to see a waterfall it’s spectacularly loud and imposing - not relaxing and beautiful. I later realised it’s because Australian waterfalls tend to be in forests, where you’re really close to them and the sound’s kept in by the trees. Gullfoss is the complete opposite of that - it’s open and (relatively) quiet and immense in scale. 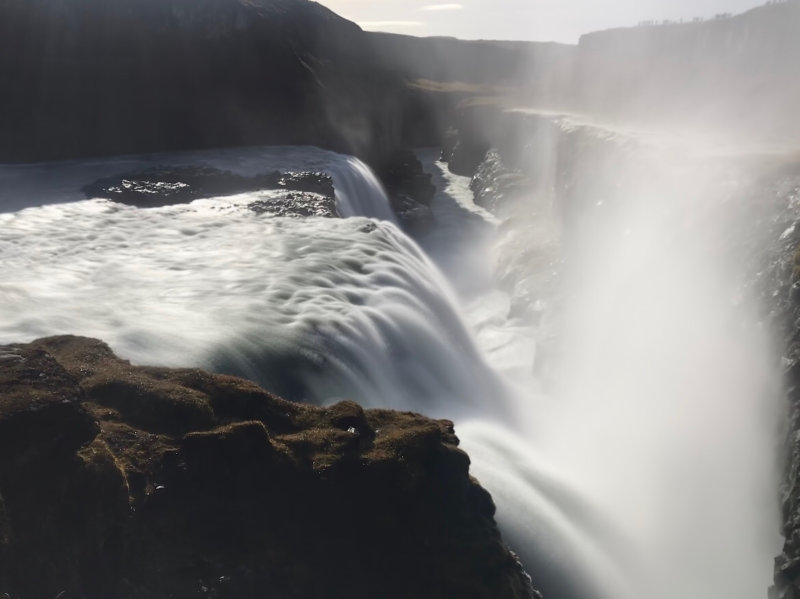 There’s two “stages” to the falls, the upper and lower falls. It’s pretty hard to explain the scale of this place in human terms, but suffice it to say it’s enormous!

Geysir. The first Geyser known to Europeans, it’s literally where the word comes from. Sadly, tourism and fools messed with it a little too much (adding soap to force eruptions, or rocks for their cannon-like excitement) so it rarely erupts anymore. 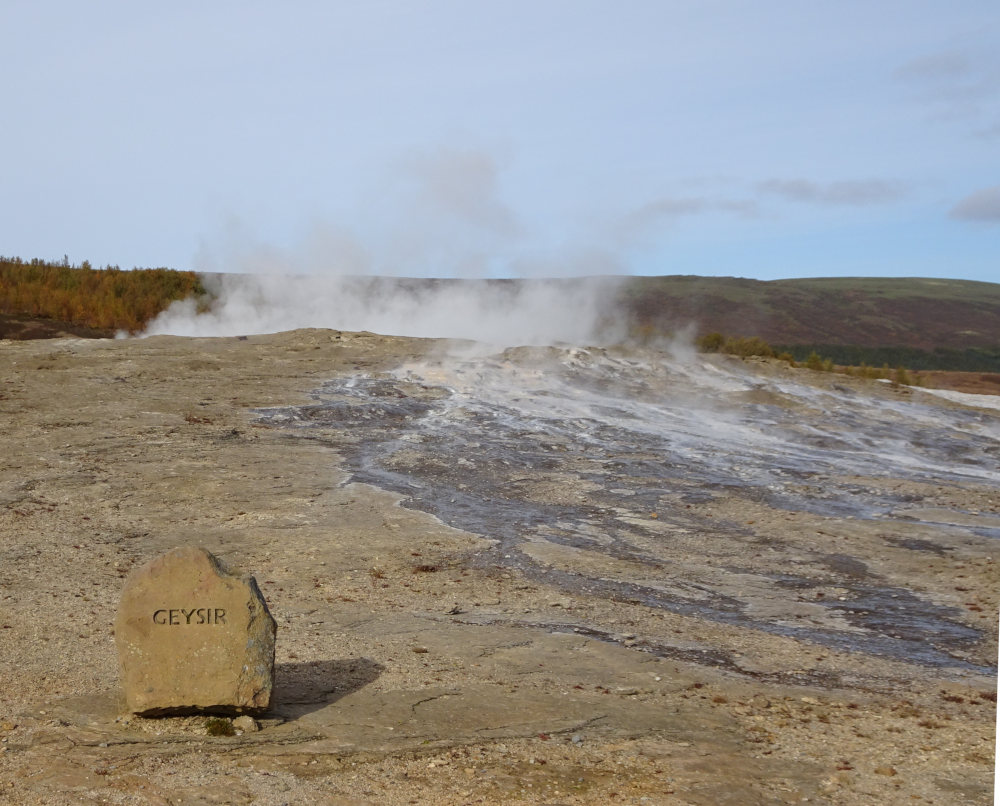 Thankfully, Strokkur, right next to it, is a lot more lively. Every couple of minutes it’ll go off, shooting water and steam meters in the air, which is truly spectacular.

First you get the bubbles, and as it goes off, there’s an incredible blue burble of water as the pressure overwhelms the gravity and water’s weight… 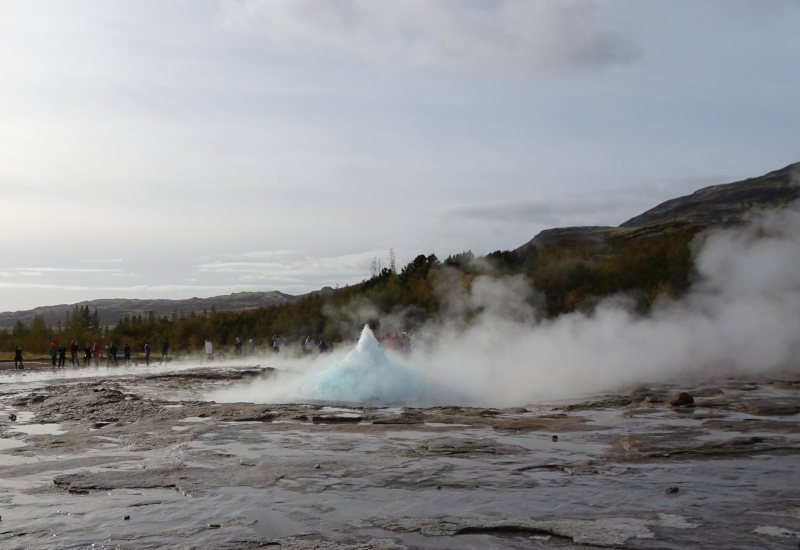 … and then, blammo! Suddenly the sky is full of steam and spray. It’s all surprisingly quiet, just the noise of the splash really. 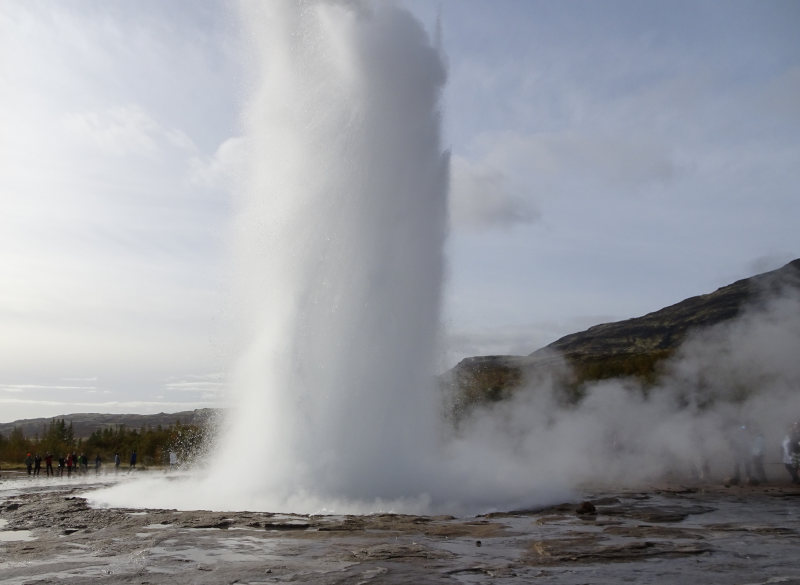 After enjoying the sights of the Golden Circle, we stopped in at the Secret Lagoon which is, as you’d expect, not secret at all. It was, however, delightfully warm and a good introduction to Icelandic spa etiquette.

The hotel for the night was the delightful Lindartún Guesthouse, located on the owner’s farmland. It’s remarkably remote, the only thing you can see for miles is cars on the main road and fields. This led to some spectacular wind rushing around the buildings, which didn’t keep us up at night, but were fun to listen to when we were awake.

The Guesthouse itself is beautifully appointed, with lovely rooms (we had our own bathroom, because we’re fancy) - but the star of the place is the shared kitchen. You could cook up a storm here if you were so inclined, with ovens and cooktops and everything you’d expect in a moderately sized commercial kitchen. 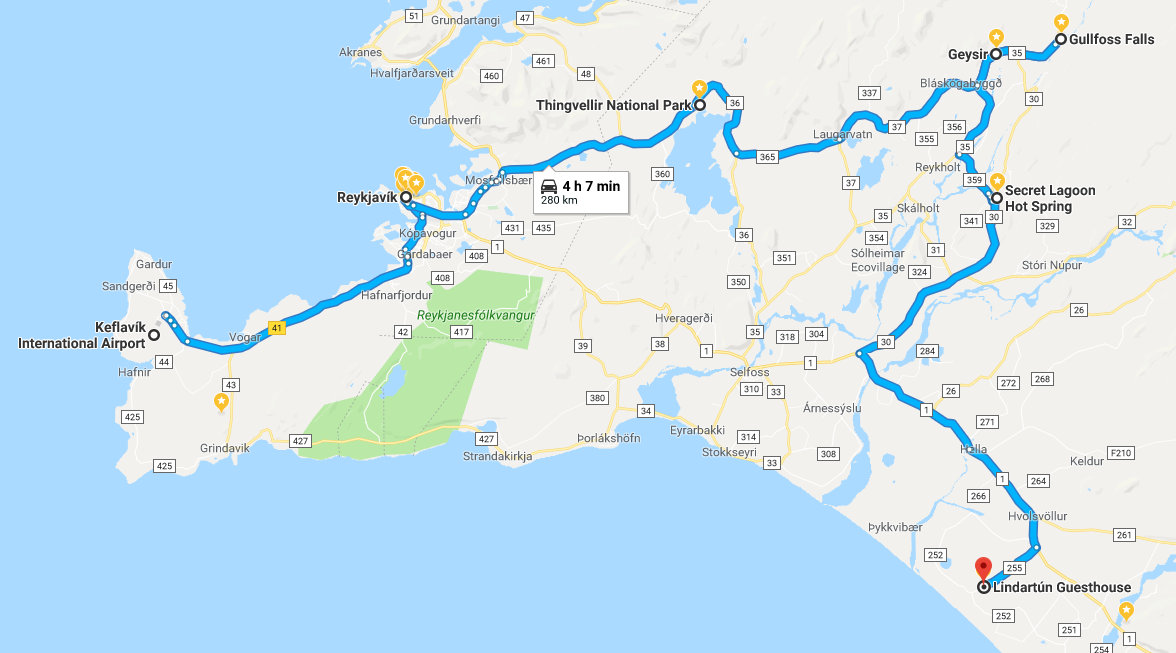