Today we started our third day in Selçuk with another delicious breakfast of local olives, eggs and other great things. I could really get used to this. An early start was on the cards due to the long transit, so we got our butts in gear and headed up to the Basilica of St. John the Evangelist and Ayasuluk Kalesi. 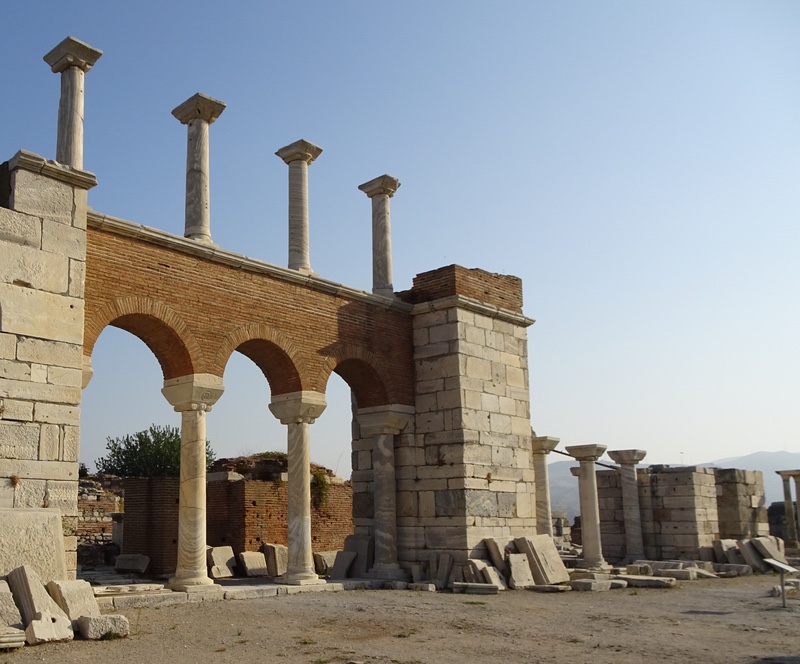 More crumblies, beautiful views and a warm day. Emphasis on the warm. It’s interesting to try and infer the designs of places based on their remaining ruins, and see how people put things together in the world’s largest incomplete 3d puzzle games. 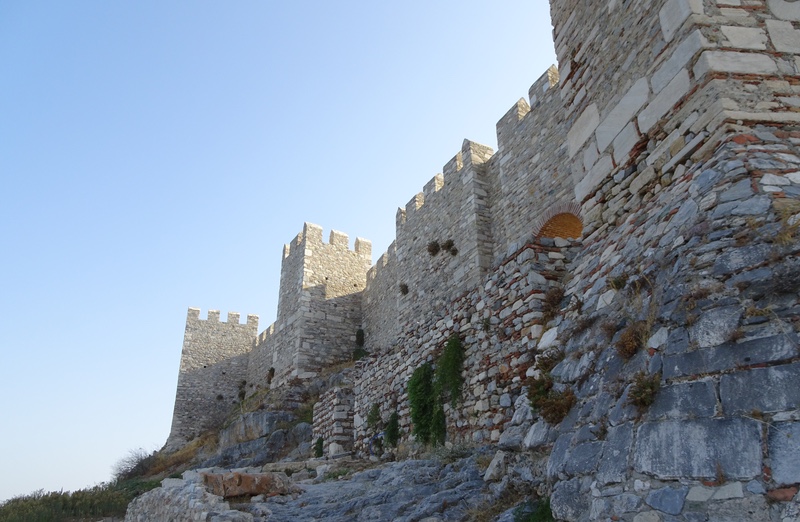 Ayasuluk Kalesi is an imposing fortification on the highest point of the local area. It commands a great view of the valley and the archaeological finds within showed a well designed place within the walls. It was curious how well the battlements have been restored - until I found out that the Turkish military owns the site and paid for it all. 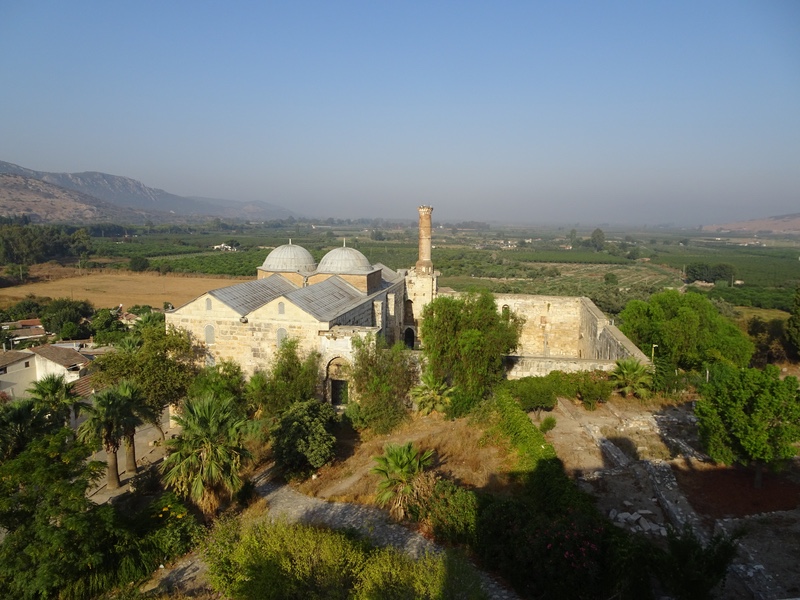 While heading out of the castle I saw this view. The seat’s for the security guard (he was in it when we entered). I can’t say I’d hate sitting here, securing a part of history and being able to enjoy this view. 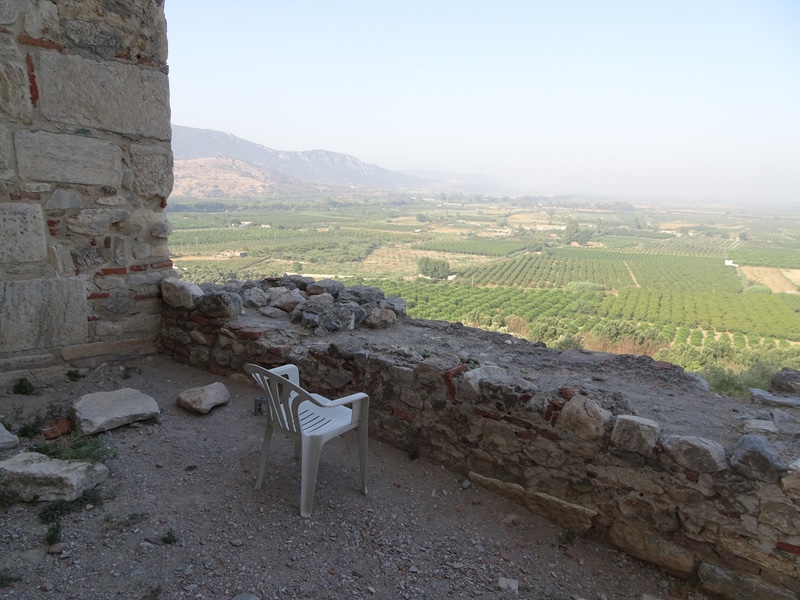 On the bus again and on our way to the feature of today and our stop, Pamukkale. On the way we found that the Aydin region is known for producing 75% of the world’s figs, is big on feta and other farmed products. It turns out Turkey’s high on the list of total production for Apricots, Figs and Hazelnuts worldwide as well.

Another story we heard was that of the engagement proceedings between a Turkish boy and girl in the traditional way. When the families come together to meet after the engagement has been announced, there’s a few things that happen.

One is that it’s the prospective wife’s duty to make sure everyone has their Turkish coffee the way they like it. If you know how much effort goes into carefully cooking this, it’s a big task - though our guide did mention her friends can help - but it’s a test of her organisation and kitchen skills. On the flip side, the man is tested as well, but for his stoicism in the face of uncomfortable situations and potentially pain as well. Typically his drink is served to him heavily salted, but sometimes also with chillies and other horrible things added. He’s required to consume the beverage without showing any reaction, or rushing for water etc. There were some cute stories from our guide Erkan about this :) 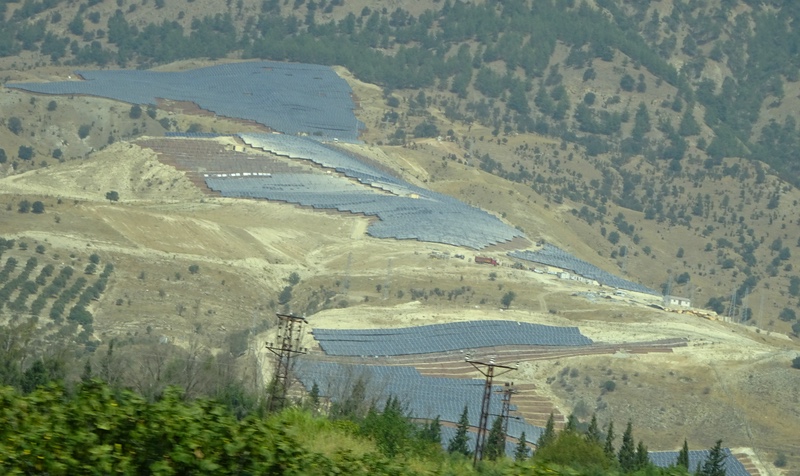 Not long after passing through Buharkent we passed some great use of available resources, namely sun and geothermal energies. There’s a lot of both in Turkey, and there’s been a lot of recent investment to take advantage of it, while reducing their reliance on supplies from Russia and the ‘stans.

The geothermal plants and their associated infrastructure are quite funky - reminiscent of the 50’s and 60’s space-age stuff from America. All shiny galvanised steel, many pipe bends and funky patterns all over the place, lots of steam coming out of things. I’m quite surprised how they pass over roads and other obstacles, somehow it looks like a corkscrew/loop-the-loop on a roller coaster every time, really artful.

So finally, we arrive in Pamukkale with their glittering hills. What a truly incredible sight! They’re almost painful to look at in the midday sun, with people walking along the path up and down the hill looking like tiny ants. The area’s brutally hot, with barely a breeze, so it feels like you’re standing in front of an oven with blinding light emanating from it. 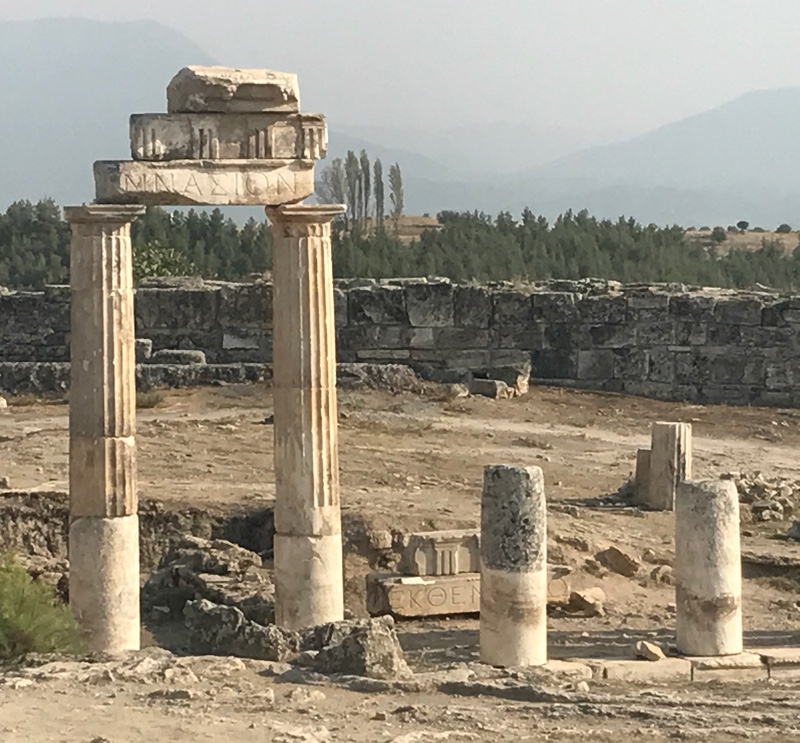 Lunch was had while it was still too hot to head up the hill, at a place called Mehmet’s Heaven. They serve a wide range of local and general Turkish fare, and have a lovely ottoman-style aesthetic with rugs everywhere and low-slung seats. Being filthy tourists we sat on the balcony in western seating and enjoyed the sights of the town.

Their pickled chillis, fresh from the garden, are something to ask for if you’re ever here as they’re quite delightful. Alongside that I had a lunch of stuffed Aubergines, chicken döner and Efes. I was told my pronunciation of the things I order is improving, which is reassuring. I would rather try and have a terrible accent than just be another tourist with a translator. I’ll never be mistaken for a local, but I’m enjoying the challenge and I know I prefer when people at least try to take part in the local culture, so it can’t hurt to do it myself.

Tonight’s accommodation is the Melrose Viewpoint Hotel. It looks very swanky, all light blue and meandros patterns and sparkly walls. In the usual Turkish style there’s a few … oddities .. but that’s half the fun. The power point which has a plug which leads into the wall and controls what otherwise looks like a properly mounted light fitting was a fun find.

Pamukkale, which translates to English as “Cotton Castle”, was the honeymoon spot of Cleopatra and Marc Antony. The highlight of ancient Hieropolis, it doesn’t matter what it’s called, it’s an incredible place to visit and an amazing example of nature’s beauty. Mineral springs carrying calcium hydro carbonate have been depositing natural limestone and marble across a wide swath of hillside for millenia to make the most beautiful natural features I’ve ever seen. 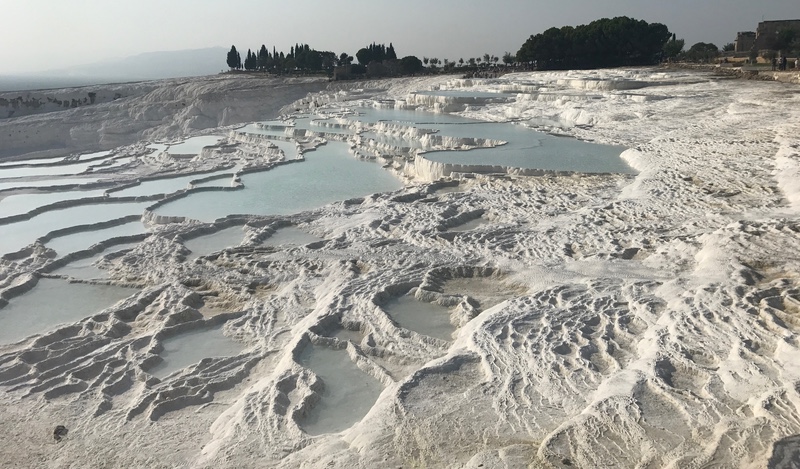 It’s truly indescribable and left one dumbstruck as I first saw the pools. They look like nothing on earth I’ve ever imagined, heard of or seen, and I feel lucky to have been able to visit and spend time exploring them. Thankfully those with the power to do so have made some smart decisions to protect this fragile and breathtaking place. 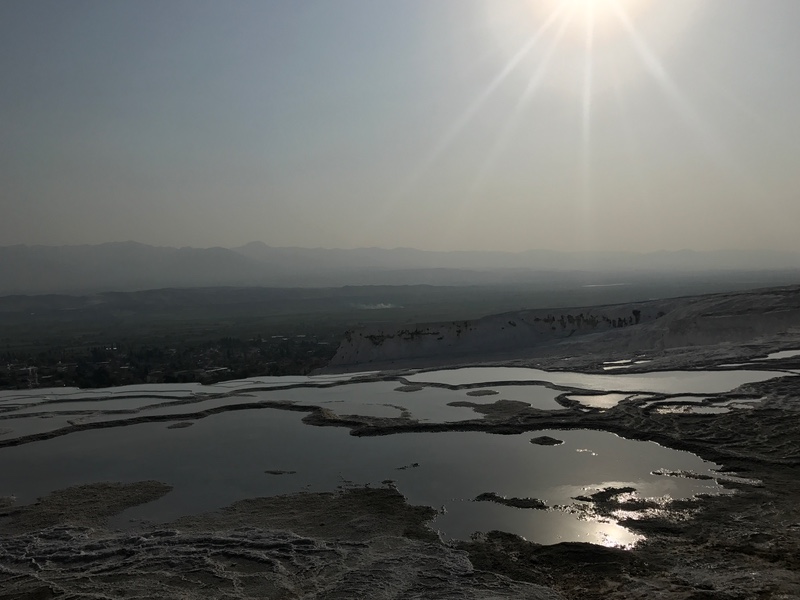 I can only imagine what they would have looked like in the past, for those people who lived there, or even in the last century when more water was available. The natural springs have succumbed to weather conditions and aren’t producing anywhere near the same amount of water, so they’re a little less full than they could be - and definitely nothing like they once were to make this amazing place. 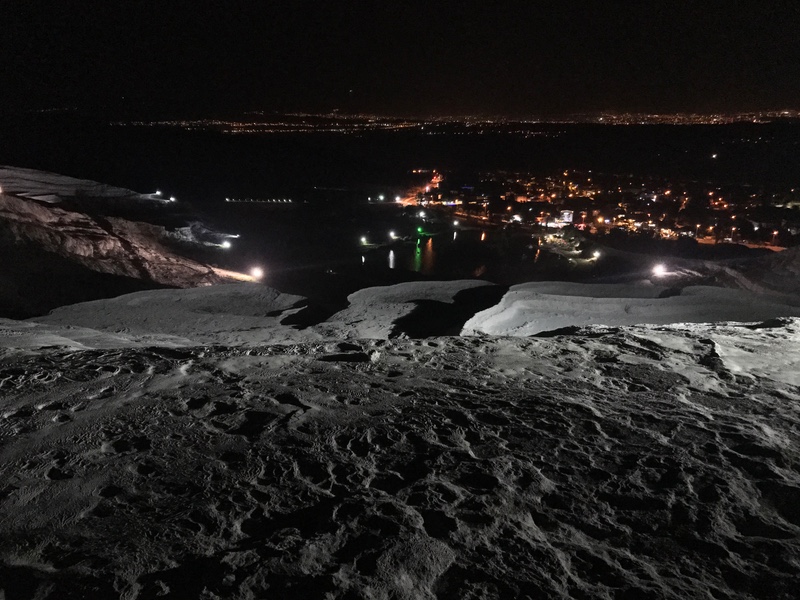 After the terraces we visited Cleopatra’s pool and had a swim. I love hot springs, and these ones were much less sulfur-laden than others I have visited. It was more like swimming in slightly flat soda water, if you copped some bubbles or breathed near the surface of the water you’d get that taste in her mouth. The location of the pool is roughly in the middle of the Roman-era palace, which was struck by an earthquake and formed a natural pool with a new spring - and dropped a load of rather large chunks of palace around. It was curious to swim to the bottom of the “deep” section, roughly five meters down, and feel the pressure and warmth of the water, which is definitely different. 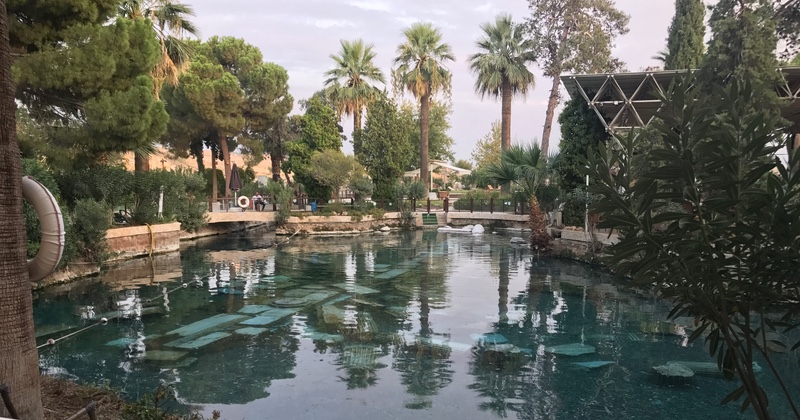 After our swim, which we really didn’t want to leave, we headed up to the amphitheater. Now, normally when people use that term they use it incorrectly, but this is one of the best known examples of the type - where the design is specifically built to deliver sound from the stage to the ears of the patrons. 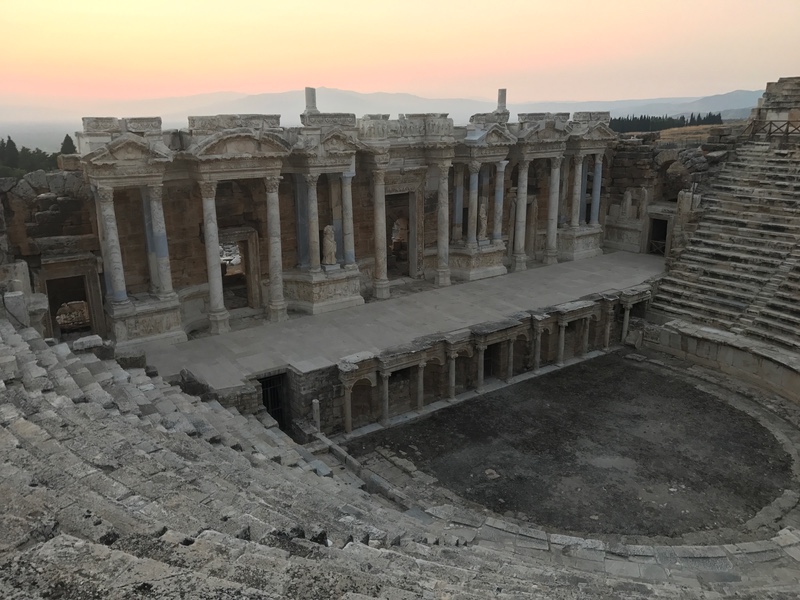 After marvelling at the acoustics of this age-old place while enjoying the sunset, we toddled down the hill to enjoy the pools by night, with some subtle lighting to provide a safe place to hang out and accentuate the atmosphere. Sadly we had to leave, but dinner was exquisite in the hotel and we made some new cat friends - one of which who returned to make a nuisance of itself whie I wrote this!