Realising that breakfast was part of the hotel stay really made my morning. Procuring that which sustains me was a little bit concerning after last night’s adventure, and I really wasn’t looking forward to stumbling out into the street, half asleep looking for food.

We weren’t due to meet up with the tour until 1300 today, so we went back to Gülhane park for a wander and to explore more of the space. What a lovely area - beautiful parkways and even thought it’s clearly all due to be replanted soon - the gardens are lovely. We got our first good look (on foot) of the “new city” across the bay; it’s truly amazing how many people clearly live in this area, the gateway between Europe and Asia. 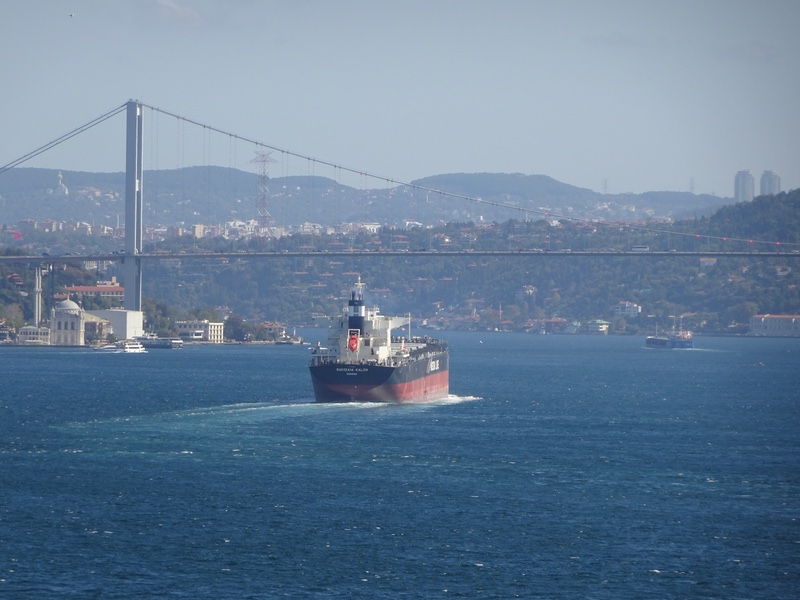 On the way back to the hotel we met a new friend who was happy to talk, find out where we are from and a little about our stay. He was most happy to show us to his shop to see his rugs and other grand things, all at wholesale prices which are much cheaper than everywhere else! Of course, it’s a Turkish custom to come and see his shop and get his card, of course! We had a little time to spare so I played along and met his friend who spoke much better english and would love for us to come back when we had more time. :)

We found a local place to have lunch, the Ayasofya Kebap House, just up the road from our hotel. My first kebab of the trip, of course it had to be Adana Kebap. Delicious and filling for about 6AUD. 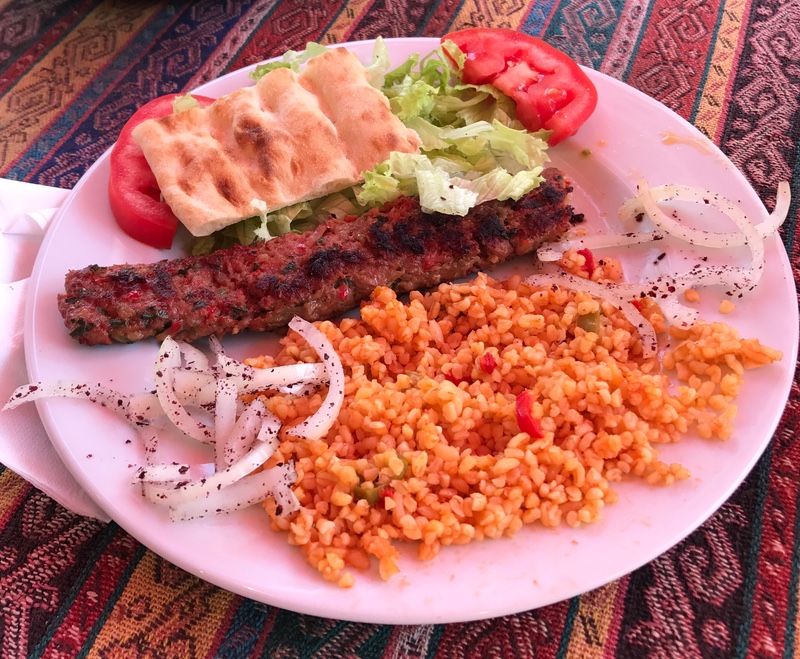 I expected the tour to be up to capacity, twelve people plus the guide, and all sorts of nationalities. Turns out we’re only five and the guide, all from Australia of course. Two Brisbanites (that’s us) a lady from Perth and two Sydney-based medical practicitioners. This is set to be a well-cared-for couple of weeks, not the usual thing you imagine from a guided tour, normally fifty people and someone with a megaphone. That’s the Peregrine way though, small groups, lots of attention to detail.

The Hagia Sophia is something we only saw from the outside today, but it’s on our list for a visit after the tour is done and we’re back in Istanbul. It’s seen a lot of history, and for hundreds of years was the largest single enclosed space in the world. The roof was an engineering marvel of its day, collapsing twice and being scaled back to successfully complete it. 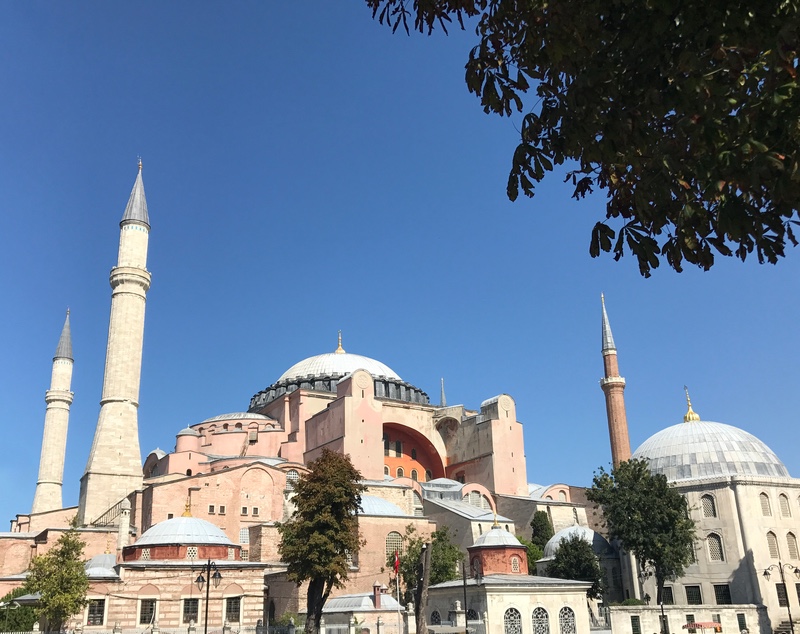 Next up was the Blue Mosque (actually the Sultan Ahmet Mosque). Every time this place comes up in conversation, it’s never spoken of with anything but true awe, and it’s well deserved. An incredibly holy place regardless of your faith, and incredibly beautiful if you’re not at all faithful. After being introduced to the history, we doffed our shoes and entered. 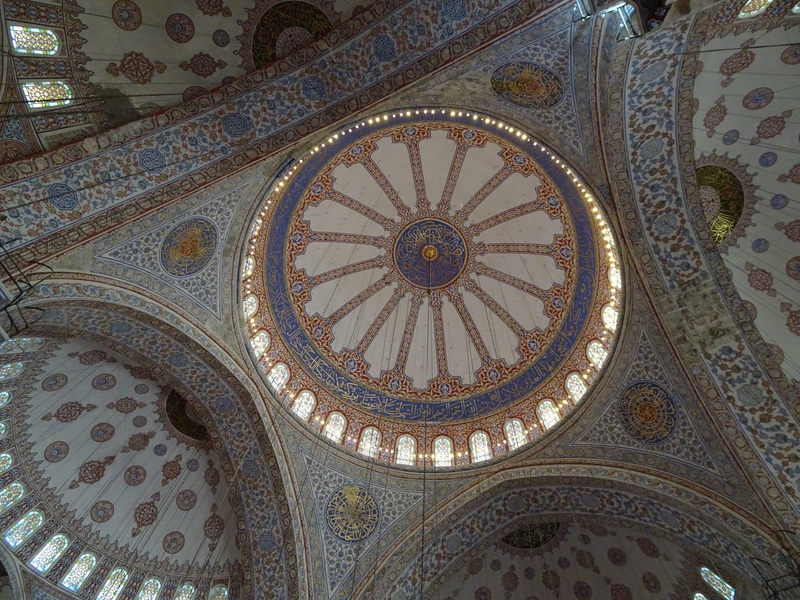 I really don’t have words for how it is to be there. There’s so much to experience. It’s not just the sights of the architecture and art, it’s the sounds of prayer and joy, the coolness of the air and the carpet under your feet. Wow. I’ll be back, and will always want to come back again.

I was quite amazed to see this on the back of the Sultan Ahmet Mosque, something I’d seen in a couple of other much smaller pieces, but all the way along the back of the mosque it’s held together with giant metal staples of a sort. I guess there’s some settling that’s happened over the last couple of hundred years and this is how they stop it getting worse. Incredible. 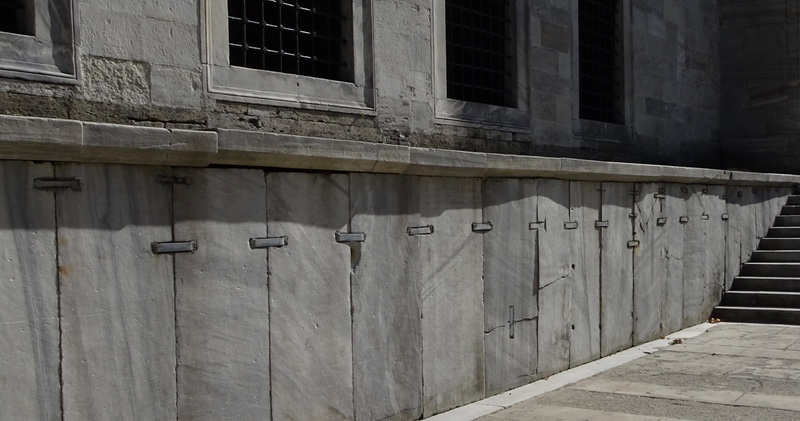 After that we had a quick tour of what was the site of the Hippodrome of Constantinople. I’ve said it before and I’ll say it again, the history suffusing this entire region is palpable. This is where the chariot races of Ben Hur were staged, three and a half meters below the level you stand on today because there’s been so much construction and just.. living.. and dying since then. In that plaza there was an uprising of the people and they say Roman soldiers killed 20,000 people right there. To dig under the flagstones would unearth bones from that day, regardless of where you laid your shovel.

And that’s before you get to the Egyptian Obelisk of Theodosius, erected on the backs and ingenuity of thousands of slaves 1700 years ago. Standing on four blocks of bronze, atop a marble platform, atop a few other layers of different rock, it has withstood earthquakes and many other incredible events to stand there for us to gawk at. 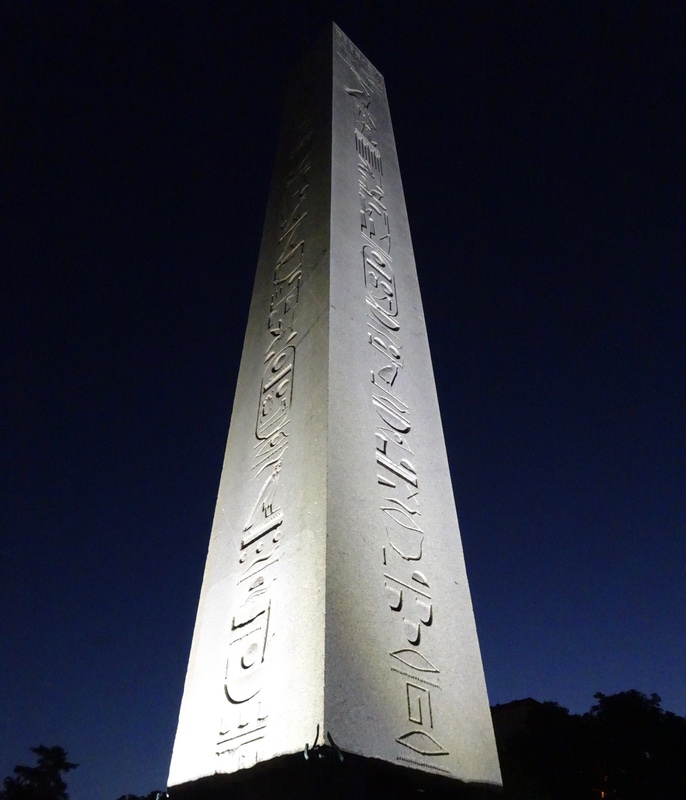 The German Fountain was built almost entirely as a bribe to the Ottoman Empire before World War One, built in Germany and transported, rebuilt and then presented in 1901 to celebrate the visit of the German Emperor in 1898. It’s an interesting little structure - not a fountain as we normally think - but a place for people to come and drink from. Originally it wasn’t plumbed to an external water supply so its reservoir would have to be regularly refilled. This allowed for an interesting feature where, for major celebrations, they’d fill it with honey water or fruit juice or other curiosities. Sadly today it’s plumbed to the mains, so all you’ll get is plain water, but our guide said to keep coming back just in case ;)

That was the end of the guided part of today, so we took advantage of the spare time to visit the Basilica Cistern, an ancient Byzantine water storage area which still is in use (though not for people’s consumption) today. Built in the mid AD500’s, it’s 140m long, 70m wide and has 336 columns, each 9m tall. Curiously the columns were taken from older buildings as part of its construction so there’s variety amongst them, and there’s two which stand atop some incredible stone heads of Medusa. 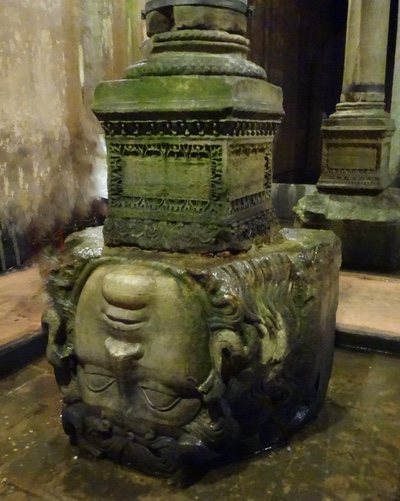 Y’know what’s hard to take photos of? A stone Medusa head, underground, surrounded by tourists, in the dark. It’s not so dark all the time though, because every second person with a cell phone is taking a photo of the first one with the flash on. Turns out I didn’t get a good photo of the second one, but it’s something I’m unlikely to forget in a hurry. 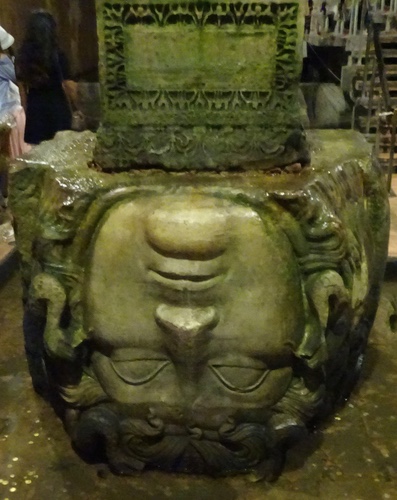 We were told it still supplies water to some of the local facilities for things like watering etc, and there are fish in the flowing water section that we could see, so that’s pretty incredible. There’s a lot of construction and rehabilitation going on in sections walled off from the public, so it’s possible that if you go some time in the future it’ll be opened up even more.

Dinner tonight was the adorable Constantine’s Ark, suggested to us by our tour guide. Self-labelled as a hassle-free zone, they certainly didn’t leave us alone as soon as we showed interest :) AuntyMary ordered “a döner kebab” and nearly ended up with adana kebab - which would have been a little more spicy than she had hoped for! Thankfully I’d picked up on the miscommunication, a learning experience was had. :)

I had the eggplant kebab, which was just delicious, double more so because I didn’t realise it came with meat! After dinner I had apple tea, which capped off the meal perfectly. 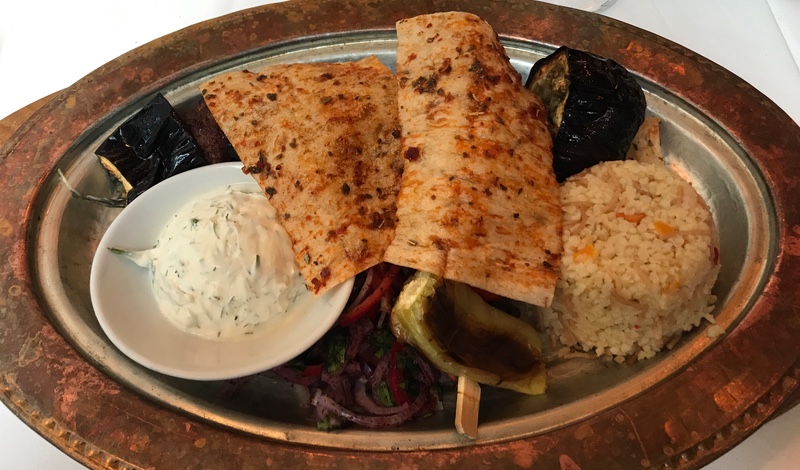 After dinner we had a rather pleasant walk around the city, heading back to the mosque area, seeing them in a completely different light - in more ways than one. I got to hear my first call for prayer, raising the hairs on my arms as their song rang out across the city. It’s hard not to imagine this happening through the centuries, bringing people together and bringing regularity to everyday life.

On the way though, we found a street full of stationery shops and PEN SHOPS! I first saw the Cross logo, then I was surprised to see the Kaweco logo too. I couldn’t believe my eyes when the two stores in this photo (the second one is on the right, look closely) turned into about ten in a row. It seems this is the place to be if you want to find something in this area, from art supplies to pens and ink. I’ll definitely be coming back here to muddle my way through trying to procure something shiny as a momento! :) 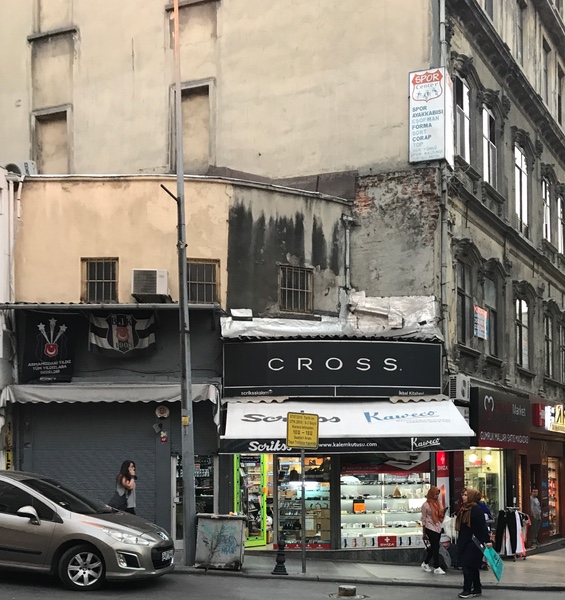 As the last of today’s “firsts” I walked past many stores before finally giving in, buying my first serve of baklava. I can imagine there will be many more, but this was my first in Turkey. :) Pistachio Baklava, nom. There’s so many other versions in every store, and that’s just for this one kind of treat. The spice shops and Turkish delights are truly an assault on all of the body’s senses! 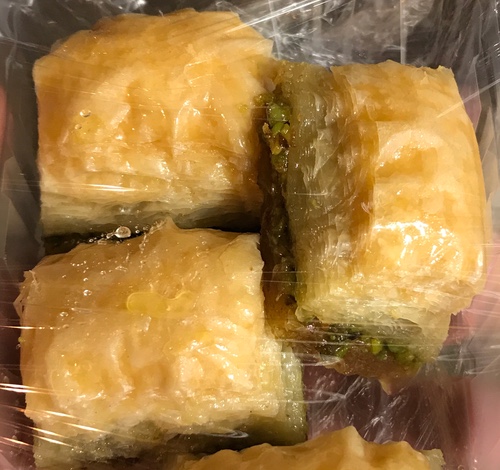