Not much to talk about in this post as you’d imagine, I’m still sitting in the airport waiting to leave.

On our final itinerary check a couple of days ago, we realised that somehow I’d completely messed up the time zones of the flights about four months ago, booking one less night of accommodation than we actually need! Bookings.com to the rescue, and we have found a “cosy” little place near London Victoria Station which is cheap, if nothing else :)

We’ve been told that the final leg of the two week tour (and our fourth week away) has a baggage limit of 15kg including carry-on as it’s a tiny regional airline. Erk. After a lot of bellyaching and worrying about the weight of the gear I was going to take on this trip, it turns out I had nothing to worry about - 11.1kg was the final weight of my duffel bag. That’s with a few extra things thrown in, including a lightweight sports bag in case I had to leave things behind in the hotel while touring Turkey! 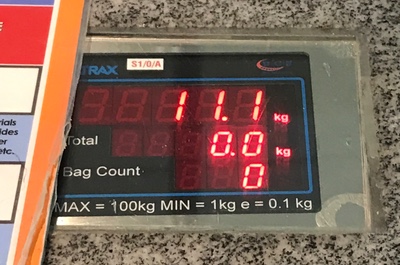 Now we just have to wait until our flight’s called, hopefully I’ll be able to understand it - more often than not they’re being called in Chinese with a secondary announcement in English - which feels strange, but I guess they’re some of the most numerous inhabitants of this spinning ball of dirt.