I finally watched Battle Royale on Monday night via Netflix after hearing so much about it for so long. It definitely lived up to expectations. Absurd, violent, poignant, and impossible in western cinema but perfectly produced by eastern. I loved it, for everything that it is.

Just Cause, a story of Florida’s habit of treating black people like shit, and its long-term effects. A stellar cast including Sean Connery playing an amazing role as the out-of-town lawyer while Laurence Fishburne defends “his” town from the outsider. I saw Scarlett Johnson in the credits but didn’t spot her until the final act, wow I’m old. A fantastic mid-90’s thriller with some great twists and turns :)

I succumbed to the hype and bought myself a fountain pen. I saw a sale on OzBargain of an eBay pen store going out of business, and picked up a Blue Parker Vector - one of the their entry-level designs. $11 got me a stainless medium-point tip, no box, no ink and a syringe-type filling mechanism.

The fountain pen arrived on Friday afternoon, and Saturday’s outing was to procure ink. Not knowing where else to go, I got some Quink Blue-Black from Officeworks and spent a good couple of hours making a right mess. Eventually I figured it out - or to be honest - got lucky, and it’s currently working nicely. 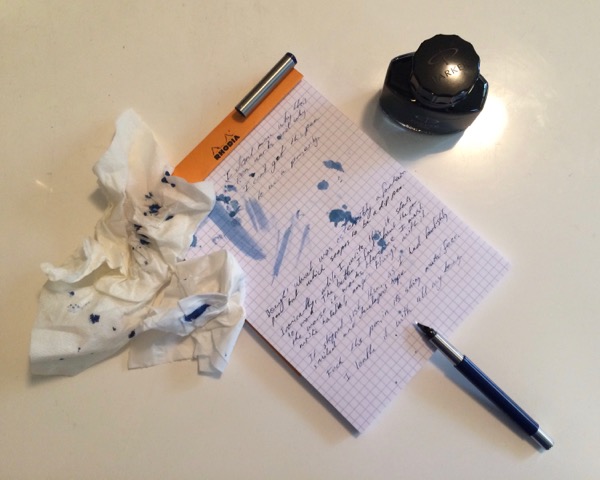 Due to inclement weather the rest of the weekend was a bit of a write-off. I spent some time working on the washing-machine stands I’m building, establishing that I have a long way to when it comes to woodworking.

Sunday morning started early with some work on-call stuff, with a lot of waiting on my part with little action required. A waste of my time, but they’re paying, so who’s to complain?

I pulled out the Ryobi chainsaw-on-a-stick on Sunday afternoon, and managed to cut up some garden waste. A limb might have falling off the paperbark while I was there as well.

Schwarzenegger and Gabriel Byrne played a game of cat and mouse over Robyn Tunney’s nymph-like character in 1999’s End of Days to round out the weekend’s entertainment on Sunday night.