I tend to look up the medication doctors give me, mainly so I know what I’m taking and what its interactions are.

I got sick about a week ago, and the doctor prescribed me Doxycycline.

I checked it out and started with “Wow, it’s even used for preventing Malaria!” Then again, it cures the plague, anthrax, the clap, pneumonia and a whole bunch of other horrible things.

I’ve been given this for something I thought I picked up at the pool? Holy shit!

Then there’s the side effects, it’s suggested not to get much sun exposure because…

it can cause permanent sensitivity and thin skin, which may lead to sun damage.

… Seriously, during summer in Queensland? I can’t go outside without slathering on sunscreen and long clothing at the best of times and you’re giving me something that in effect turns me into an albino Scotsman.

The packaging also states I should stay upright after taking it, which must be done twice a day after food.

I can’t nap after eating? Screw that!

It seems the Doxy didn’t do much other than lower my bank balance, because as soon as the prescription ran out, I was sick again. Now the doctor thinks I’ve got Glandular Fever (mono, for you Americans) - the kissing disease. A blood sample’s been taken, and it’s going to be a couple of days wait before that result can come back. 🙁

This time they’ve got me on Septrim, another drug which causes vampire-skin.

It’s another broad-spectrum one, so if I’ve got pneumonia or toxoplasmosis I should be OK. UTI’s, L/URTI’s and other things should all be cleared out. Hopefully this one works, because glandular fever’s a right prick.

It does worry me though, putting these things into my body willy nilly, hoping to kill some microscopic thing that could be a bacteria or maybe a virus. And the side effects? I guess they left the bit off about the lust for blood and baroque clothing styles… 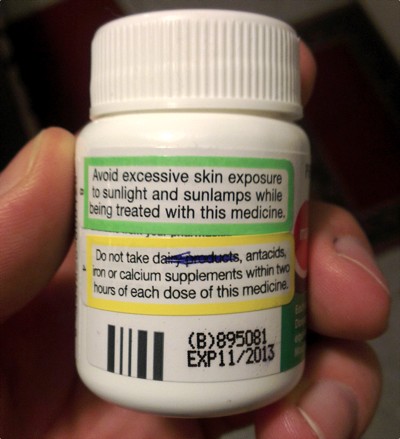