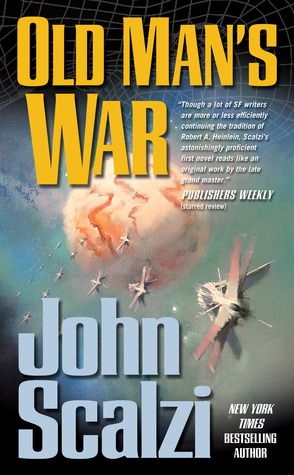 I was watching the latest episode of the Sword and Laser book club when they did their kickoff for the January 2013 book club. I’d been meaning to see if I can follow along with it, because while I have many books to read, it’s been hard for me to get around to actually committing to reading them.

They reminded me in the show that it was in the book Humble Bundle which I took part in and promptly forgot about 🙂 So I pulled it from data storage and had a look, being instantly sucked into the story.

It’s is a story of a time in the future when humanity started to move to the stars, but with a twist.

All the high technology required for space travel - called skip drives, a type of quantum teleportation - is owned by an off world group called the Colonial Union (CU) who won’t release it to those on the planet.

For various reasons, the CU have decreed that once you leave, you can’t come back to Earth. Don’t like it? Don’t leave! They own the technology, and no one else has been able to work it out.

The easiest way for most people to go off world is to turn 75, where the Colonial Defence Force (CDF) allows you to join the military and you’re “refreshed” ready for combat duty. Of course, because no one’s come back, no one on earth knows how this works - but it’s a ticket to a new life.

This is how our story starts, with the main character in his last days before enlistment. He lost the his true love to a stroke, and his last act is to say goodbye to his wife’s grave for the last time.

Before you go past the spoiler alert, I’ll say that I wholeheartedly enjoyed this story, with its tale of love, loss, reunion, renewal and joy. I’d highly recommend it for anyone that enjoys light science fiction with a dose of war. Most people should get through it in a couple of days of casual reading.

Upon going through the process of enlistment - easier than signing up for a mobile phone these days - John’s handed his identity card and told to be ready to fly to Nairobi in three days, then onto the sky lift to space.

They’re given an entertaining host of medical check-ups and tests after the implantation of nano machines in their skulls, which gives way to the crux of their “refreshing” - replacement bodies. The new bodies are packed full of the best technology and gene modification you can think of, and are reminiscent of the body swaps and colouration changes/eyes one remembers from the movie Avatar.

In an obvious yet not distracting nod to Starship Troopers, they’re introduced to their enemy, and told of the endless war against alien forces which saves humanity from extinction. Their first two years of service will be in the infantry, and then on to other postings if they’re the lucky 25% that survive, or back into “real” bodies and off to be colonists. Heinlein is warmly referred to in the acknowledgements at the end.

There’s a reference or two to “realborn” when some of the Special Forces troops talk about humans - which brought me fond memories of stories from the Battletech universe.

All in all, fantastic 😀

This was slightly edited to fit their format and posted here on Goodreads.