Last year I started camping with a group of my friends from the SCA. The SCA is a large group of medieval re-enactors, and while we stay in big tents and don’t have electricity, we still have running water, toilets and some of the other niceties of life 🙂

We had a couple of Coleman On-Demand Portable Water Heater

systems, but they were finicky, dropping out regularly and requiring small expensive LPG canisters and constant refilling of their water bottle because they couldn’t be connected to mains water. Their $400 cost wasn’t particularly inviting either if we wanted to scale up.

After talking to some friends, I found the Camp Chef HWD5 Triton Hot Water Heater

. Even though it was in the US, I was able to get it to Australia for the princely sum of $145 including shipping. It’s rated to supply ~5lt/minute of hot water - which should be plenty based on my calculations 🙂

It requires 2x D Cell batteries, a pressurised water feed and a normal LPG bottle like you’d normally use on a BBQ. This pretty much removes every annoyance with the Coleman units. No refilling water jugs, no recharging 12v SLA batteries (which don’t last long with the Coleman’s  pump) and much MUCH cheaper gas supply.

Camp Chef HWD5 Connectors
Gas In / Water Out / Water In

The connection for the water comes with a variety of brass adaptors, including one that’s the same as a normal Australian tap, allowing for the fitting of a garden hose to supply water. I’m going to put a tap in-line just before the system, allowing connection/disconnection without shutting off the supply and making a mess.

A ‘propane’ feed line and regulator is provided, but it comes with a QCC-1 connector which doesn’t seem to be available on anything Australia currently. The POL connector is more common here, so I had to find something to make it work. Unfortunately an adaptor wasn’t terribly easy to find so I just bought another regulator/line for ~$40 from Masters. If you’re looking to do it yourself, you need something with POL (or the connector for your gas bottle) on one end and a 3⁄8 SAE fitting on the other.

The small valve between the Water Output and Input labels is the drain connector, it’s at a low point in the system to allow all the water to be drained when need be.

The unit is fairly simply constructed, a thin metal shell containing the gubbins and assorted electronics. A heating element in the middle and a heat exchanger with some piping for the water in the top. Certainly not something you’d want to take on the Dakar rally, but it should do nicely for what we need. It comes with an 8 foot long shower hose and a low-flow head, along with fittings so that if you were going to make a mount, the handle would have somewhere to hang.

I’m still coming up with a plan of how to build a container to transport the unit and also some contrivance to mount/use it once we’re there, but basically it’ll be a toolbox and stand with some mounts for the various bits.

As per the title, this is my “first look” at the unit - but so far it’s promising 🙂 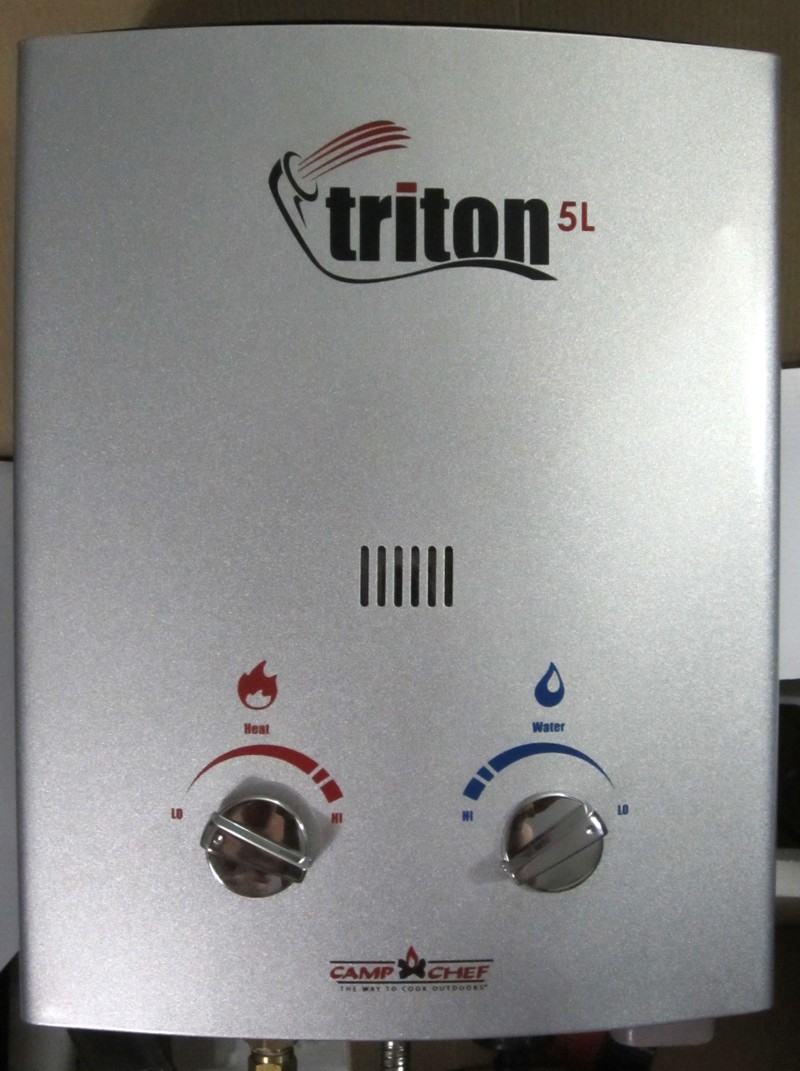