So, RMB’s had a pair of the beautiful Samsung 931B’s for a few years now. They’ve been quite reliable until recently, when one started flickering on and off.

This actually had been happening for a month or two, and if you turned it off then back on again all would be good. Eventually this turned into just plain not working - acting like someone was just tapping power all the time. As this started, the other one started flicking on and off periodically.

One thing I noticed was that when the busted one would do its thing, you could hear a high pitched whine like a camera flash re-charging itself. I figured there was nothing to lose by pulling the monitor apart, it was dead already and the warranty had long since lapsed.

Googling for some information before hand, I found some vague references to the power supply and something about capacitors, so I had a fair idea of some things to check. Lo and behold, after prising the case open, I found the culprit.

Tip: don’t worry about the clips in the casing, just undo all the visible screws and wedge a flat screwdriver in the gap and twist.

As expected, cheap capacitors were to blame. CapXon brand, no less. I’m not sure who thought putting such low-quality components behind such a nice panel was a good idea (an accountant, probably) but they really should be slapped. 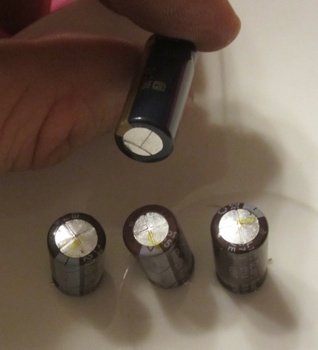 As you can see above there’s quite the bulge to the tops of the faulty capacitors, and those three came out of the less-faulty monitor and are a lot less bulging than the first set I pulled out. I forgot to take a photo but them’s the brakes.

The power supply required the replacement of three 25 volt 820?F capacitors. RS Components saved the day (and me a load of effort) with their free overnight shipping. Ordering the parts on Tuesday night, I received them Thursday morning. A total cost of about $9 worth of parts fixed the problem, and that’s at small-quantity prices. I had to order 10, packs of five and all, but I’ll use them somewhere else I’m sure. I bought high-quality Panasonic parts, so hopefully they’ll outlast the other components in the monitor. They’re bigger too, so that must be better! 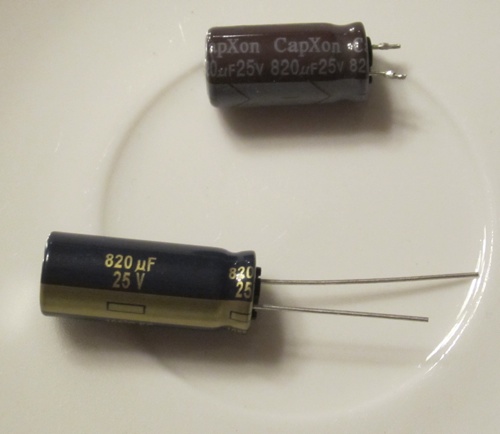 So, if you’re having issues with flickering 931B’s, I can highly recommend pulling the power supply out and having a look at it. If you’re not great at soldering, I’ve seen replacement power supplies on ebay for ~$30USD which is also remarkably cheap.

Here’s a great quote from a thread I found which is echoed in many places:

… the CapXon ones in this thread are by far the biggest culprits, and even their own datasheets specify their short design life …

Why do they even bother with this garbage? 🙁