Ok, so I’ve come to a few realisations this week:

I bought myself a new phone today, a HTC One X. Nice phone, a little bigger than I’m used to, but this come with some bonuses to readability etc. Optus again, $60 contract, $9.95 for 1GB of extra data blah blah. Free 3G Home Zone thingy, which I’m not sure there’s much use for - if I have internet I have wifi, hence data. Maybe if I ever move to an area with crap mobile coverage it’ll be handy.

Um, yeah. Stuff. At this stage I’m going to look at selling my bike and using those funds to pay debts and push myself onto home-loan savings mode. Along with this, concentrate on a few things such as shooting, coding and riding my eBike. Maybe some lego? 🙂

This should keep me busy enough blah blah happy. Getting a trophy today for the 2011 rimfire shoot comp was fairly awesome, seeing as I haven’t been for months and it only took a detail or two for me to get back into the groove. I don’t think I’ve had a trophy before - yay!

I want to get back to attending these shoots once a month and at least training once a week. This should be easily done by going down on a (something) afternoon for an hour or so and just working on some kind of drills. It’s relatively cheap and the first sport of any kind I’ve been simultaneously good at and interested in.

There’s not much in the way of improved gear to add to the sport, I can go with crazy sights and modifications to the ruger I’ve got, or I can just concentrate on getting really good with it and making me perfect.

I want to get myself (and RMB) range-officer certified. This isn’t hard with the amount we’ll be on the range anyway, but it’s another notch in my belt as far as the sport’s concerned. Maybe if I can get into the groove of jogging or riding with a small pack down to the range and back on a weekend for a shoot that’ll get my fitness up as well? 🙂 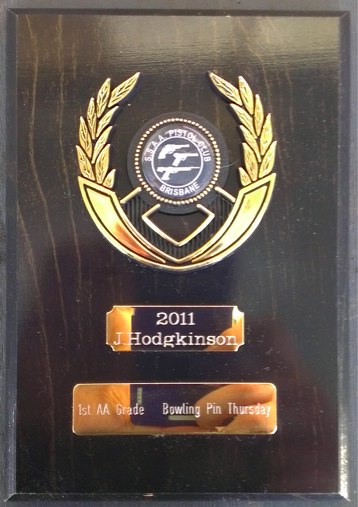