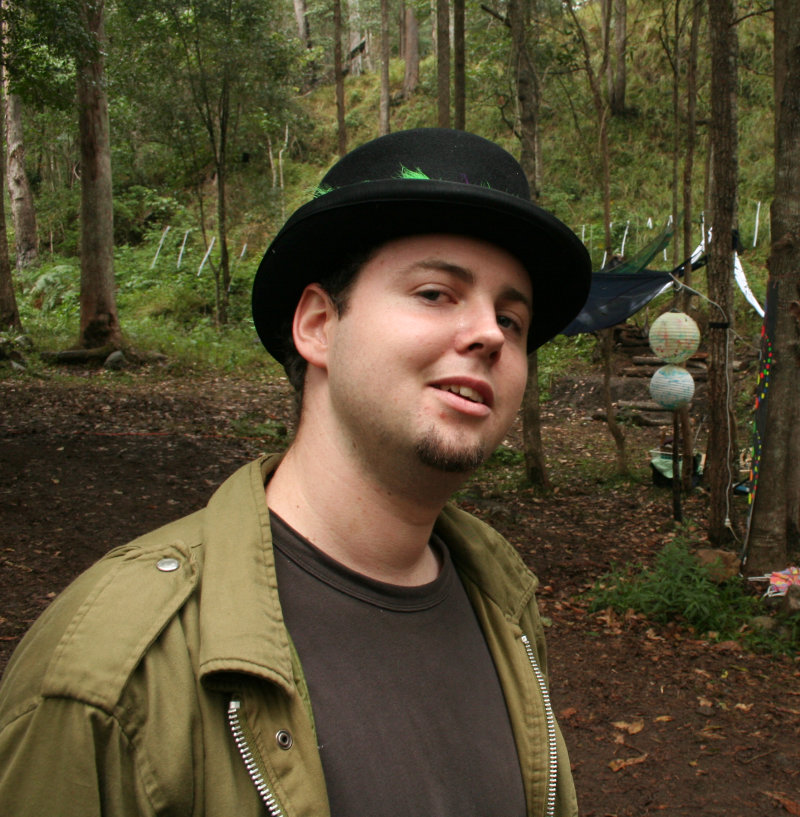 If that weekend wasn’t an adventure, I don’t know what was. As usual, I seem to have extended the bounds of human awake-ness by staying up over 48 hours with only the occasional microsleep when I wasn’t busy enough to distract myself. I got up at about 6pm Friday night and didn’t actually fall asleep again until about eight thirty on Sunday night. Hooray! 🙂

So, onto the story of what happened. Friday night was just work, how boring. Saturday in the daytime, I finished making my bean bag chair and chilled out around the house a bit, then got ready to go to the OCAU Outing to the Hog’s Breath Cafe. Since we were leaving to go to a doof straight from the dinner, Brian picked me up from my house and then we went to Mitchell’s and met up with Bob and friends there. On the way to the dinner we stopped off for doof supplies, and I went to get money out… here’s a timeline of what happened:

Notice the thing that’s slightly out of place there? Ooh, you’re smart! There was $40 just sitting there poking out of the machine… score 😀 That paid for my dinner, which was kickass. I had an “upsized” steak with calamari. For ~$39 with a single basic spirit, it wasn’t terribly cheap, but it was good food, and I’m sure I needed the protein for my adventures!

Eventually we got out of there, and continued on our journey to the winter solstice event up near Maleny. I’d been there before, so I didn’t think to write down the directions. My brain’s great at remembering thigns isn’t it? Well, it seems that it wasn’t. By the time we were there, I’d been up for 24 hours, and I was a little bit muddy - sitting in a dark car with nothing to do but do bulbs didn’t help either, so I remembered MOST of the directions. We got to Maleny (after missing the exit off the Bruce highway) and then through it and onto Maleny-Kenilworth road. After that, all I could remember by that point was that there was a hippy village that we had to turn right into and then we had to follow the road. 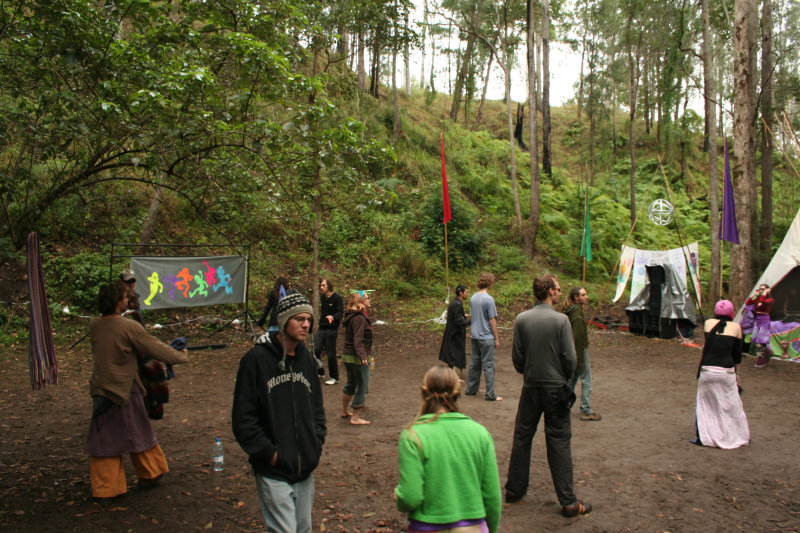 Boy was I wrong! About three and a half hours driving later, and at least half a tank’s worth of fuel, we decided to head back to Maleny so we could get mobile reception and try to call someone. That was cool, but since it was about 3am, noone was awake to call 🙁 I got on IRC and into the #psytrance channel on oz.org and asked for directions - luckily enough, someone was awake and helped me out - thanks Cybrwulf! 😀 Bloody hell it was cold though, sitting on the side of the road in gear that’s not designed for cold weather, in a light rain at 3am. At the same time, Brian happened to open his Powerbook, and found a wireless network to connect to - Maleny has a free wireless connection for people to use as long as they register! So we had another source of directions to confirm them.

We were on our way again! 😀

It didn’t take us long to get there, and we parked and paid our entry fee to the wonderful PhatBoi (or is it Fat Boy? I don’t know) and joined in the festivities. There aren’t many photos from this doof, because there was always a persistent light rain or possibility of one, so I didn’t get my camera out very often. 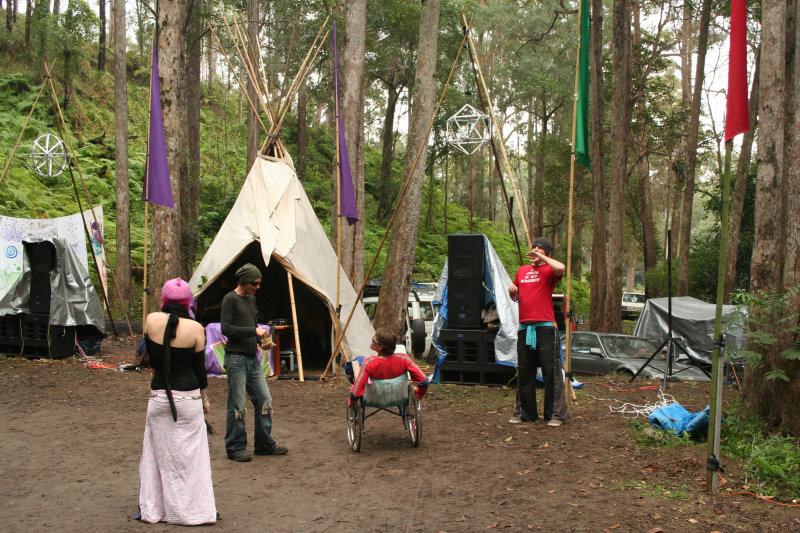 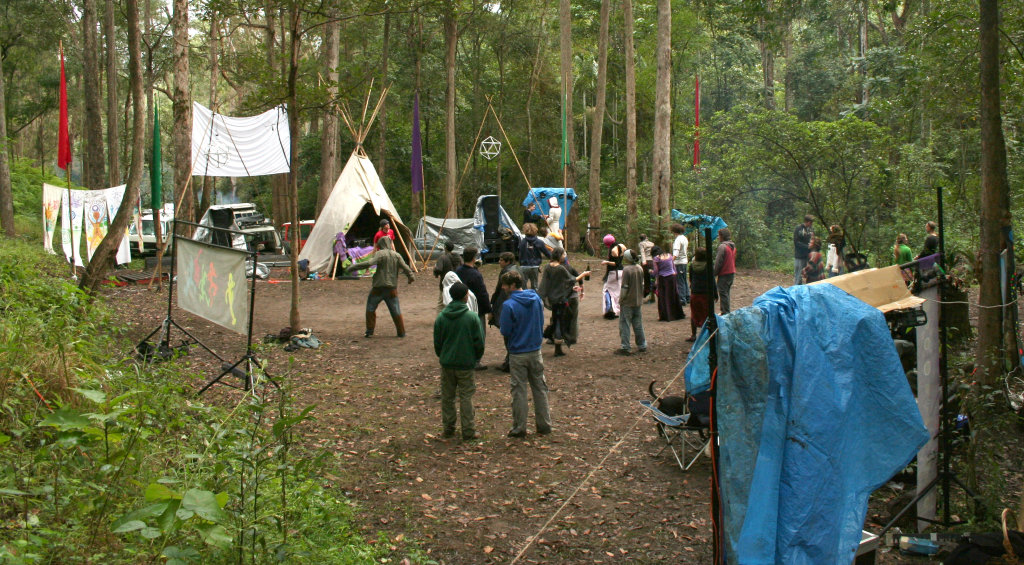 I love the venue this doof was at sooooooo much - I think it would be impossible to truly describe in words. There’s an intense feeling of peace being surrounded by rainforest up in the hills where the air is clear and you’re far away from the city. Mornings are absolutely beautiful, where you feel you’re in a cotton-wool bubble because of the mist that surrounds the venue. The vibe was great, if the attendance was low (probably because it was cold and wet) with some amazingly cool people turning up.

Mitchell and I had visited the confectionary warehouse before Easter and found a big box of 240 sherbert straws for about ten dollars, so we bought them thinking they would make great things to hand out at a doof. Boy were we right! Since we got there at about 4am, most people were asleep, so when everyone was waking up at about 8am we got out the lollies and walked around to everyone handing them out. It was great fun - at one point everyone on the dancefloor had at least one sherbert straw. A couple of hours later, there were some seriously hyper people, but that’s half the fun!

Throughout the day I danced and sang and met up with some old friends and new, enjoyed the scenery and wished I didn’t have to go home at the end. Eventually that time came, so we packed up the car and made our merry way back to Brisbane. As usual I drove because the others were WAY too tired, but that’s fine because I love driving 🙂 The funniest thing happened with Brian on the way back, as we were coming along the Gateway near the airport he was like “man, I think I’ve just hit the wall, like… pow” and then promptly passed out. I think he was right 🙂

The music was great, the people were great, and the weather was great. I had an amazing time, and I can’t wait for next week’s event in northern New South Wales! We’ll be travelling down on Friday night, then helping with the setup on the Saturday morning. It’ll be great 😀