Well, that was an amazing long weekend for me. I was working my usual overnight shift on Friday night and decided that I wanted to climb a mountain. Years and years ago my family and I (well, mum, my little sister and I; the other two are wussies) climbed Mount Beerwah, so that was a good start. Looking on the web I found the Glass House Mountains and Surrounds page on the Queensland Environmental Protection Agency (now National Parks, Sport and Recreation) website. There’s a few pages there with maps and so forth - we ended up relying on this map in PDF form to get us there.

It only took about an hour or so, with a few detours because the roads didn’t seem to match up with the directions we were heading until we realised things aren’t signposted as well as they could have been around that area (if you’re heading north on Old Gympie road, don’t continue going north to get to Mount Beerwah, you have to turn left, as the other side of the sign correctly shows).

The first part was getting to the base of the mountain, that was pretty much 700m of just stairs. Not a good start for those of us that are bloody unfit and are carrying a shiteload of camera gear. Getting to the bottom of the climb face, we took some photos and planned how we were going to climb up. It didn’t take long to realise that the joggers I was wearing were pretty much useless for climbing and that the gear needed to be a LOT more compact next time. I got utterly stuck because the handholds are designed for people with grippy shoes - Bob helped from the top side and a friendly climber gave me a lift past the place I got stuck at. Hooray! 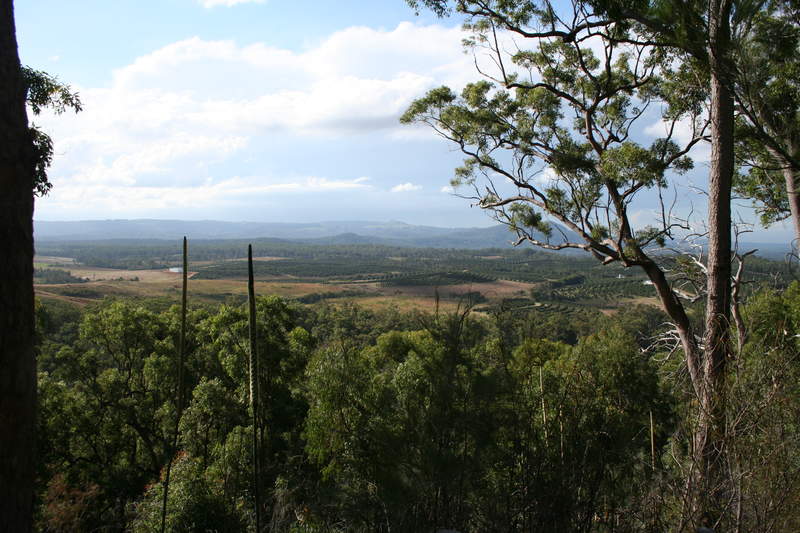 Looking across to the coast from the bottom.

As I said above, I got stuck on the first section of the climb, about half way up - there wasn’t many hand or footholds that my shoes would grip on, but I got up there. Once we passed that it wasn’t too hard at all. We took the time to rest (my legs were shaking from holding me in strange positions) and take some photos. 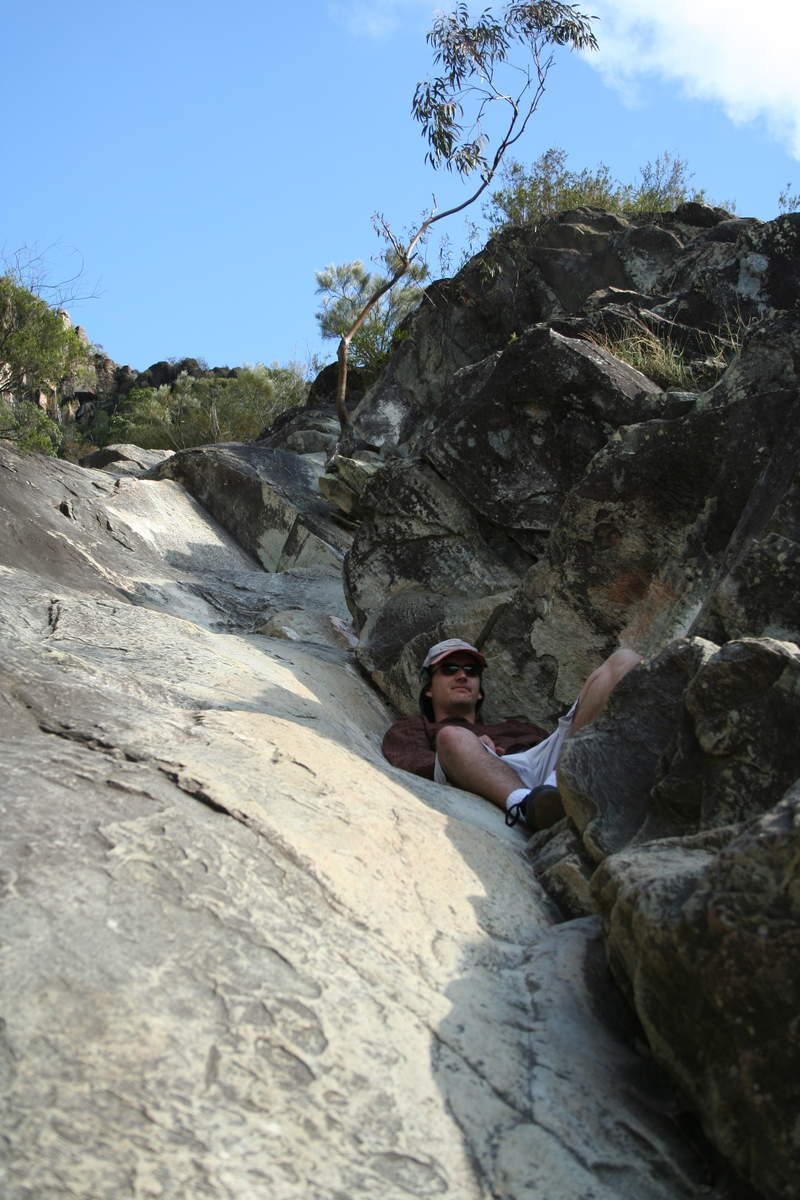 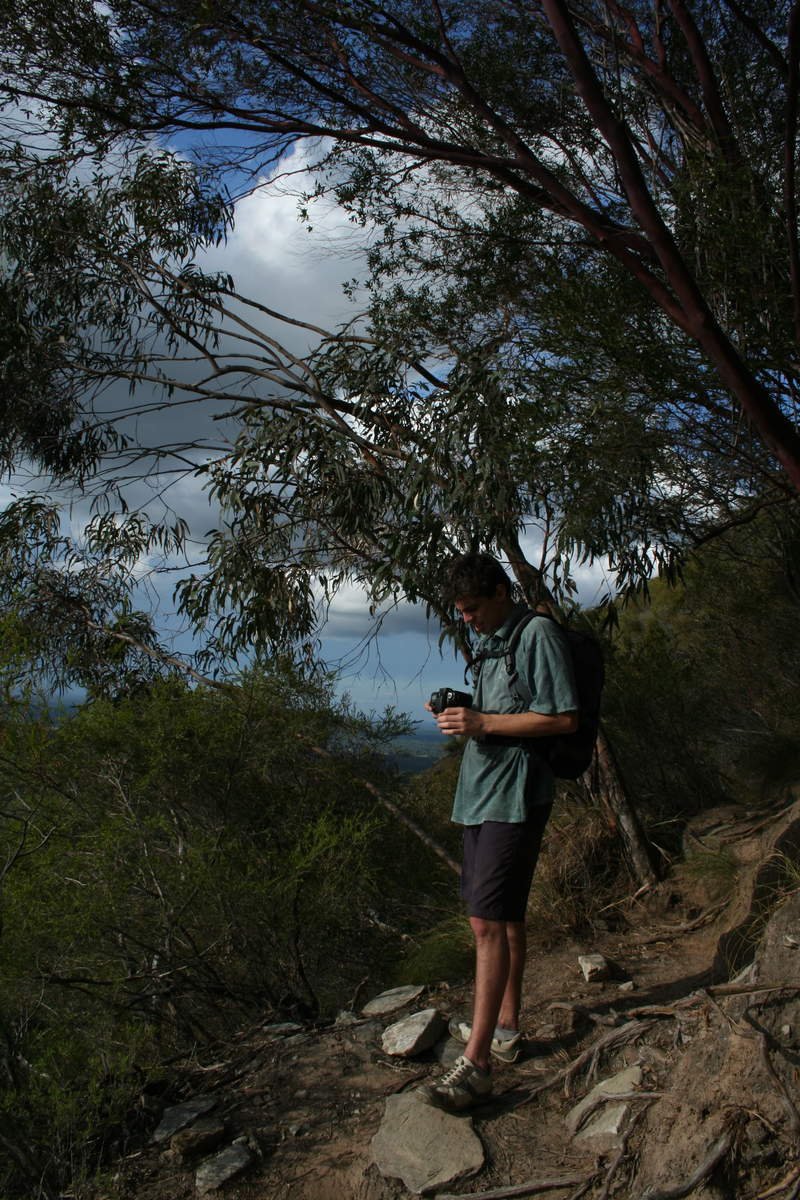 We continued higher, with some good medium-level climbing and some good challenges - arriving at the next plateau we found that it was going to be hard to get up the next section. While Bob went further up the hill, Brian and I took the opportunity to take some more photos and enjoy the unimpeded view as far as the eye could see. We realised at that point that the light was fading - mainly because of the rain that was heading our way. 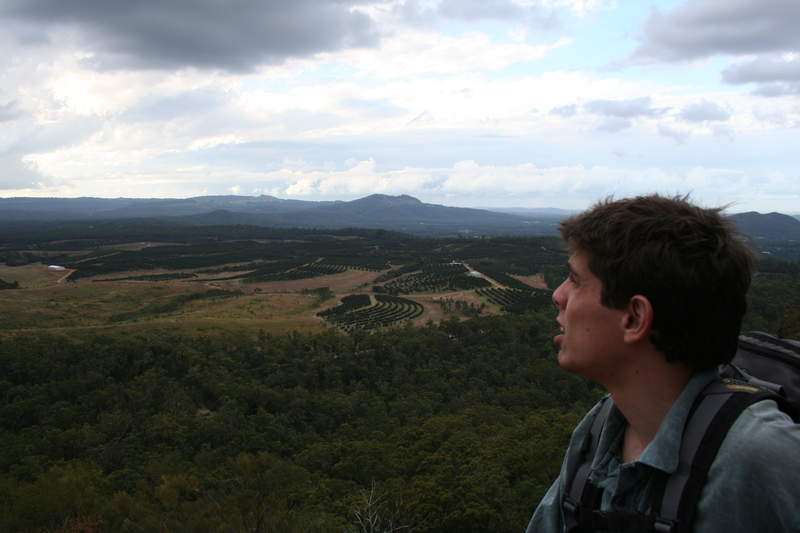 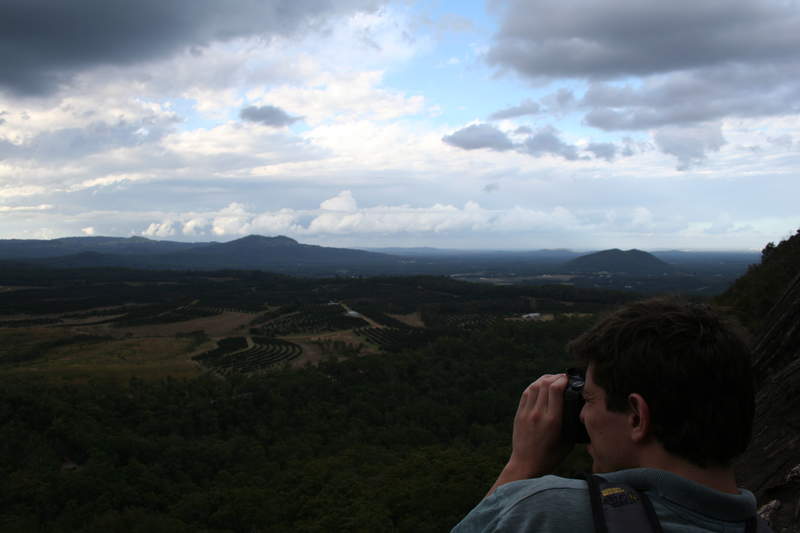 Looking over Brian’s shoulder at the highest point

The decision was made to get down off the hill, and I lowered the gear bag down from that point with rope so I could climb down, then we went back a slightly different way that included some quite large steps to make it a bit quicker. As we went down the rain started spitting, increasing to a light shower by the time we were off the climbing section.

As we got back to the carpark the rain was falling quite hard, confirming that we’d made a kickass decision to haul ass off the mountain. Slippery rocks, cold weather and no light equal a sucky time.

On the way back we stopped at a little fruit market, picking up a really nice pineapple drink - mostly big chunks of the fruit and very refreshing! There was some quite cheap fruit too - two dollars a kilo for apples, oranges and mandarins. Coming back to Brisbane I wish I had bought some bananas, they were $7/kg there for good ones, and it’s about $10/kg for terrible green ones here.