Desk. That object in front of, many of us perform our daily worship of the gods of capitalism. We work, we study, we relax. The desks I have available to me on my overnight shifts are small, barely room for my work needs and nothing more. Somehow I squeeze my laptop on there, allowing me to keep myself occupied and awake. If it were any smaller, there would not be room for many normal people to sit, while keeping useful storage space in the drawer below. Me, I’m over two meters tall, so any semblence of comfort, let alone ergonomics is destroyed by both my size and the desk’s lack of. Attempting to sit with my legs under the desk would require either dropping my seat to the lowest height setting, or me constantly knocking my knees on the fittings underneath.

I can’t even call it “my” desk, since it’s not mine in any sense of the word. I arrive at work, and there are quite a few to choose from. I can’t leave anything at the desk, since this isn’t the normal “day shift” floor for my department, and everyone sits at any desk they like. Personalisation of the desks with trinkets and belongings would be a travesty beyond belief, breaking the rules and possibly instilling some life into the boring surrounds we have here.

On this level, on the overnight shift, my department has eleven desks to choose from, and tonight there’s at least three that aren’t working. From the remaining eight, there are four that I don’t like sitting at since I don’t like being watched from the other end of the room. That leaves four seats that I can sit at, and when there’s someone else on the overnight, I have to be quick and get the one I like, since sitting right next to someone for eight hours is hard when you don’t really want to talk to them.

I sit here, night after night, reading my book, writing my ramblings, and getting paid to wait for someone to call in with an inane request. So far I’ve been here tonight for six hours and forty-eight minutes, going by the clock built into the phone on my desk, and only fifteen people have called. Four hundred and eight minutes, fifteen calls. That’s an average of twenty seven minutes, twelve seconds between a call. Realistically, a lot of those calls were before midnight, since there are relatively few reasons for people to call after that time, since “normal” people are asleep.

It’s been rather quiet for a Saturday night, since normally there’s a lot of people calling to report their handsets lost while out on the town, or whatever people do on the night of a weekend. All the calls have been relatively simple, people asking for their balances, checking on things on their account and so forth, the usual sort of stuff. It’s nearly 5am here, so that means for the most part it’s 6AM for our customers, daylight savings time making people get up early and so forth. Typically there’s a higher amount of calls after this point, since the blue collar workers will be arising, making ready for their days at work, and doing things like paying bills and finding their phones gone after the previous night out on the town. I can’t wait, you can see the excitement in me building already, can’t you?

Time’s flown past relatively quickly tonight, and I’ve nearly finished the book that I started reading in the evening before my shift. It’s Isaac Asimov’s Nightfall Two, a book published in 1971, published by Panther Science Fiction. A collection of the master of Science Fiction’s short stories, each with a small passage about it written by the author to give the reader something more to think about. I’m finding it a pleasant read, as most of Asimov’s novels are.

I think I might go back to it, and leave you with a picture of my desk. Or should I call it a chicken coop, since that’s what many call it when looking upon my tiny grey portal to terrible ergonomics. 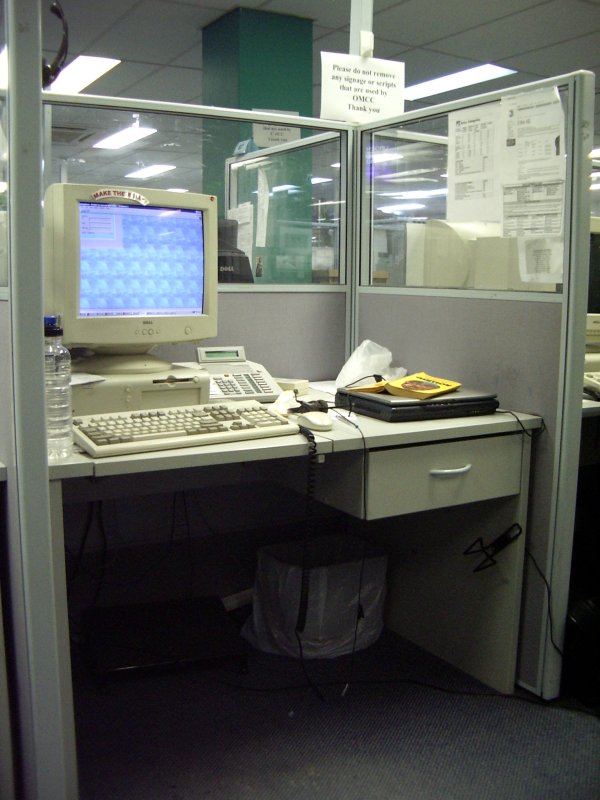